Ice Man's Stage (アイスマンステージ, Ice Man's Stage) is an ice-themed stage that has Ice Man as its boss. It appears in the first Mega Man game, its remake Mega Man: Powered Up, and Mega Man: Dr. Wily's Revenge.

Ice Man's stage contains frozen tropical trees in the background, suggesting that the snow is not part of the area's natural climate, unless the trees are artificial (like the trees in Mega Man 8's Opening Stage) or ice sculptures. As the terrain is covered with ice, Mega Man slips when walking on it, but he can avoid it with jumps. The stage contains two areas with Appearing Blocks and a large area with pits that can only be passed by using the Foot Holders in the area or the Magnet Beam.

In New Style, Ice Man's stage was modified, having different enemies and one section that can only be accessed by Fire Man.

In Construction mode, the Scenery Packs Ice Starter, Ice Extra, and Old Ice are based on Ice Man's stage.

Ice Man's stage is a frozen area with several mountains in the background.

In Issue 3 of the Archie Comics Mega Man series, Ice Man, having been reprogrammed by Dr. Wily, took over a water treatment plant.

Ice Man took over a resort and held several civilians hostage, keeping them inside a building. Mega Man defeats him and frees the hostages. 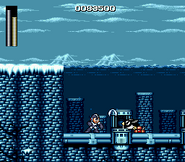 Resort in the Rockman manga.
Add a photo to this gallery
Retrieved from "https://megaman.fandom.com/wiki/Ice_Man%27s_Stage?oldid=298876"
Community content is available under CC-BY-SA unless otherwise noted.