"There's something dangerous up ahead, sir! Oh? Freeze it at all costs, soldier!"
―Ice Man, Mega Man Powered Up

Ice Man (アイスマン, Aisuman) is a Robot Master from the original Mega Man . He was created by Dr. Light to perform human-like tasks under extreme climate conditions. This can be done due to the fact he is impervious to chilling sub-zero temperatures. Ice Man is also capable of functioning in hot environments, though he is less powerful there. His Special Weapon is the Ice Slasher, a sharp ice blade launched from his mouth that can freeze anything with its temperature of 200 degrees below zero. Freeze Man greatly respects him.

Ice Man has been known to love showing off for crowds of people and can be known to be sometimes very self-centered, but he cares deeply for his friends. As his namesake he loves participating in activities revolving around snow, like snowball fights. Ice Man has been known to have a dislike of heat-related things, such as sauna baths and ironically enough, the Fire Storm.

Dr. Wily reprogrammed Ice Man and Dr. Light's other industrial robots to help him conquer the world, and Ice Man appears as a boss and is defeated by Mega Man. He is weak to Elec Man's Thunder Beam.

Ice Man will start the fight by going to the right corner and jumping up. He will then shoot 3 Ice Slashers. One up, one in the middle and one while landed. Jump over them carefully (Mega Man will lose 10 health points if he is hit by one). When he lands, he will immediately jump and do the same pattern again, but this time starting from down to up. He will then slide towards Mega Man. When he starts getting pretty close, and after doing the pattern again, he will slide away from Mega Man. He will repeat this pattern then over and over. Bear in mind that Ice Man's Ice Slashers get faster as the fight drags on, so it's recommended that he is finished off as fast as possible.

A remake of the first game. Ice Man appears to have two personae, referring to himself as a soldier (in the first person) and as a commander (in the third person). He is often scared when others show up, prompting the commander persona to have him attack. Nothing about his mental state is displayed in the manual, however, so it's reasonable to assume he is adopting the commander persona as an imaginary friend rather than a split personality.

Like the original game, Ice Man is a boss that attacks with his Ice Slasher, but his pattern is different. He also has an additional attack were he makes ice stalactites fall. In Normal mode this new attack is used when his life is halved, and in Hard he can use it anytime. Ice Man is weak to Bomb Man's Hyper Bomb, but if Mega Man defeats him using only the Mega Buster, he becomes a playable character.

As a playable character, Ice Man can use his Ice Slasher to briefly turn his enemies into frozen blocks. He can then use these blocks as an extra foothold to get to places that other characters cannot reach. In addition to this, Ice Man does not slip on the ice blocks in his stage.

Ice Man appears as one of the first four bosses. He acts similar to his appearance in the first Mega Man game, but the number of times he uses Ice Slasher per attack was reduced to four.

Ice Man is one of the six bosses from the Mega Man 1~2 course. The theme that plays when fighting him is a remix of Freeze Man's stage theme.

Besides his Ice Slasher attack pattern from the first game, Ice Man also attacks by using Ice Slasher several times without jumping or by creating clouds that drop snowflakes that can freeze the player's character. He is weak to Guts Man's Super Arm.

He makes a cameo when fighting Freeze Man, seen on top of the Moby in the background.

Ice Man is one of the fastest players from the game, alongside Gemini Man and Dr. Wily, but he has the lowest Tackle and Defense. Ice Man doesn't have his own team, but he is a member of seven teams in Tournament mode and the Mega Man and Cut Man teams in League mode.

Ice Man wants to go on a vacation in the South Pole, so he enters the competition to obtain money. His vehicle is Cool Mobile. In his ending, Ice Man makes an ice sculpture of him with Roll, hinting that he has affection for her.

Ice Man and the other Robot Masters from the first game assist Mega Man. However, Ice Man is the only of the six Robot Masters to not appear in a scene to save Mega Man when he is defeated by a boss, only appearing briefly in the beginning and ending of the game.

Ice Man is one of the bosses from World 3. He also appears in some Battle Memory.

Ice Man is featured in the game Rockman Strategy, appearing first in Taurus' stage in Western Asia alongside Frost Man. He subsequently joins Guts Man and Cloud Man in holding Duo hostage, only to be defeated by Mega Man's team.

Translation: Robot made for extreme temperatures.  Usually uses Ice Slasher at the height of jumps.

Translation (approximate): A robot working in a cold storage warehouse carrying luggage, was originally created as an Antarctica exploration robot. He looks pretty weak but is formidable. Special Weapon is Ice Slasher.

Displays the amount of damage in units that Ice Man will receive from each special weapon from the original Mega Man.

"And with Mr. Zero's super freeze formula, Dr. Wily will make me the COOLEST guy in the world!"
―Ice Man, Episode 7: Ice Age

Ice Man makes his first appearance in Episode 1 of the Mega Man animated series, but he doesn't actually speak.

He reappears in Episode 7, "Ice Age" alongside Air Man in a plot to freeze the entire city. Here, he has a major role and is depicted as being one of the more powerful Robot Masters, defeating Mega Man, Roll and Rush at least three times over the course of the episode.

He is eventually tricked into fighting against Dr. Wily when Dr. Light convinces him that Wily has betrayed him and replaced him with Air Man. This prompts him to plan a revenge attack against the evil doctor, by taking command of a group of powerful "Ice Bots" provided by Dr. Light.

Ice Man was the first Robot Master besides Cut Man and Guts Man to appear in more than one episode.

Ice Man appears in Mega Man: Fully Charged among the rest of the Robot Masters fought by Mega Man. Unlike most other Robot Masters, he is not a recruit of Sergeant Breaker Night. Instead, he wants to be a hero and do the right thing, which puts him at odds with Mega Man when his attempts go awry.

This version of Ice Man lacks his signature parka hoodie, being replaced with a blue santa hat, and now has visible hair. He is noted to have a more simplistic AI compared to other Robot Masters. As such, he takes things very literally and his morality is more black-and-white, unable to understand things like metaphors or the reasoning behind actions.

Ice Man appears in the fifth episode, "Mega Trouble in Megaland", along with the other original five Robot Masters, working as a subordinate to Cuts Man. Unlike some of his fellow Robot Masters, he does bear a resemblance to his original counterpart, maintaining his usual blue parka and white boots. However, he has a cyan and much more robotic-looking face and cuboid body, and fights against the heroes using a handheld pistol that can fire either a freezing beam or sharp icicles that can be used as projectiles or  makeshift barricades. Interestingly, he resembles the DC Comics Supervillain Captain Cold.

Ice Man is also referenced in passing during the episode "Nightmare on Mother Brain's Street", where Mega Man mentions that his worst nightmare is of being frozen solid by him.

Ice Man, along with the other six Robot Masters, appeared in the clip show episode "When Mother Brain Rules".

Ice Man was originally created by Dr. Light to scout the continent of Antarctica, but having finished his mission there, Ice Man returned and is now working in a large cold storage warehouse. In order to function in harsh environments and extremely cold temperatures, Ice Man's internal circuits are made up of the smallest components available. These small components allow Ice Man to function with the least amount of energy possible, and they are also the reason for his physical form being smaller than usual. The only disadvantage of using these smaller components is their hyperconductivity, and a strong electrical surge like Elec Man's Thunder Beam will easily incapacitate him. Despite his small stature, Ice Man is quite effective in combat.

When Dr. Wily reprogrammed Dr. Light's six robots and tries to conquer the world in The Birth of Mega Man, Mega Man fights against Ice Man inside Wily's mobile fortress, stopping him with Thunder Beam. Ice Man is later repaired by Dr. Light and he helps to stop the fortress. In R Destruction Order, it was decided that the six robots should be destroyed, but Wood Man saves them and convinces Ice Man and Elec Man to join Dr. Wily. However, they actually wanted to find Dr. Wily and knock out Wood Man inside Wily's base. Ice Man freezes Dr. Wily's control panel to stop him from launching more rockets. In the original version of the story from Rockman Remix, he also freezes Reggae.

Ice Man also appears in Mega Man Gigamix, where he participates in the Battle & Chase competition.

Ice Man took over a resort and made several hostages. Mega Man infiltrates the area to save them and Ice Man does a surprise attack by freezing him. However, Mega Man melts the ice and defeats Ice Man with Thunder Beam. He later reappears inside Dr. Wily's hideout, but is quickly defeated with Thunder Beam.

Dr. Wily takes control of Ice Man, Cut Man, Fire Man, Elec Man and other robots to help him conquer the world, and the assistant robot Rock asks Dr. Light to modify him for combat so he can stop them. Rock becomes Mega Man and manages to destroy most of the rampaging robots, angering Wily, who sends Ice Man and the other three robots to stop him. At first they have numeric advantage over him, but Mega Man hides in a building and they split to find him. Mega Man defeats one at a time, each fight being easier with the Special Weapons he obtained, Ice Man being the last to go down.

Ice Man, alongside Blizzard Man and Chill Penguin, entered the Battle & Chase competition so they could use the prize money to return to Antarctica. Ice Man is hit by Napalm Bomb during the race and is severely injured, Mega Man and Blizzard Man stopping to assist him. Seeing the scene, Shadow Man decides to help them by taking water from his radiator to Ice Man, saving him and becoming their friend. 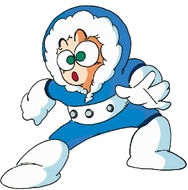 Front, side and back view of Ice Man.

Artwork of Ice Man from Mega Man Powered Up. 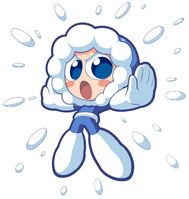 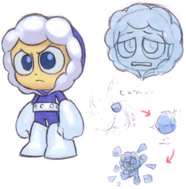 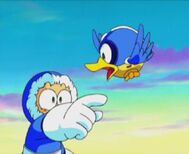 Ice Man in Rockman ×over. 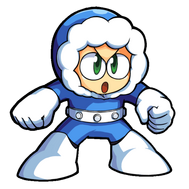 Ice Man in the first teaser of Rockman Online.

Ice Man in the Rockman manga. 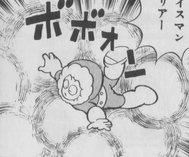 Ice Man from the Mega Man Trading Cards.
Add a photo to this gallery

Retrieved from "https://megaman.fandom.com/wiki/Ice_Man?oldid=304062"
Community content is available under CC-BY-SA unless otherwise noted.