Episode 1 and 7
from the Mega Man cartoon

"There's something dangerous up ahead, sir! Oh? Freeze it at all costs, soldier!"
―Ice Man, Mega Man Powered Up

Ice Man (アイスマン, Aisuman) is one of the first six (eight in Mega Man Powered Up) Robot Masters from the original Mega Man series. He was built by Dr. Light to perform human-like tasks under extreme climate conditions. This can be done due to the fact he is impervious to chilling sub-zero temperatures. Contrary to popular belief, he is capable of functioning in hot environments, though he is less powerful there.

In Mega Man Powered Up he has a split personality, referring to himself as a soldier (in the first person) and as a commander (in the third person). As a playable character, Ice Man can use his Ice Slasher to briefly turn his enemies into frozen blocks. He can then use these blocks as an extra foothold to get to places that other characters cannot reach. In addition to this, Ice Man does not slip on the ice blocks in his stage.

Ice Man is one of the two ice Robot Masters to have a weapon which is effective on a fire Robot Master (the other being Cold Man). Freeze Man greatly respects him, likely for this reason. 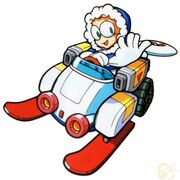 Translation (approximate): A robot working in a cold storage warehouse carrying luggage, was originally created as a Antarctica exploration robot. He looks pretty weak but is formidable. Special weapon is Ice Slasher.

Displays the amount of damage in units that Ice Man will receive from each special weapon from the original Mega Man.

Ice Man makes his first appearance in episode 1 of the Mega Man cartoon show, but he doesn't actually speak. He reappears in episode 7, "Ice Age," alongside Air Man in a plot to freeze the entire city. Here, he has a major role, defeating Mega Man, Roll and Rush at least three times across the course of the episode.

He is eventually tricked into fighting against Dr. Wily when Dr. Light convinces him that Wily has betrayed him and replaced him with Air Man. This prompts him to plan a revenge attack against the evil doctor by taking command of a group of powerful "Ice Bots" in episode 7.

Artwork of Ice Man from Mega Man Powered Up.

Front, side and back view of Ice Man.
Stage03.jpg
Concept of Ice Man's stage.

Retrieved from "https://megaman.fandom.com/wiki/Ice_Man?oldid=180087"
Community content is available under CC-BY-SA unless otherwise noted.