Ice Man is a character from Mega Man: Fully Charged.

Much like his video game counterpart, Ice Man is a small humanoid robot dressed in blue clothing. However, rather than wearing his trademark parka, Ice Man instead dons a normal jacket along with a small winter hat, leaving his snow-white hair visible. There are two large knobs on the sides of his head, which resemble ear muffs. He also has a white scarf that is draped down his back.

Ice Man is a well-meaning robot who wants to be a hero like Mega Man, but due to a bug in his programing, he has a tendency to take things too literally and take actions that seem much less noble in others' eyes. For instance, upon hearing Aki Light's speech about how robots and humans should be inseparable, he interpreted this to mean that humans and robots should be physically bonded together, and so went around Silicon City freezing anyone in sight to bond them together. This wouldn't be the last time Ice Man's literal mind would result in serious problems for Silicon City. Ironically, he is not a cool-headed individual, as he gets visibly agitated or even flies into a rage if somebody gets in his way. In Chill Out, Bruh, Dr. Light fixes Ice Man's literalness problem and anger issues, but is sabotaged by Sergeant Breaker Night. By the end of the episode, the problem is fixed by Mega Mini.

Ice Man can shoot projectiles that leave their target frozen in a block of ice, similar to the Ice Slasher used by his counterpart from the original Mega Man. He's also capable of skating on icy surfaces and generating ice blades at the end of his arms for close-ranged combat. 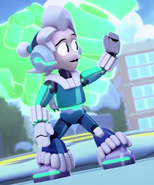 Ice Man, along with all the other characters, in the opening of Mega Man: Fully Charged.

Mega Man prepares to take on Ice Man and the Hoover Gang.
Add a photo to this gallery
Retrieved from "https://megaman.fandom.com/wiki/Ice_Man_(Mega_Man:_Fully_Charged)?oldid=313946"
Community content is available under CC-BY-SA unless otherwise noted.