Ice Wall (アイスウォール, Aisu Wōru) is Cold Man's Special Weapon from Mega Man & Bass. When equipped with this weapon, Mega Man or Bass creates an ice column that can be pushed to attack enemies. The Ice Wall shatters after some time, breaking faster when damaged. Creating an Ice Wall above or in the same position of an enemy will make the column hit the target several times before breaking, causing massive damage to stronger enemies. The ice column can also protect the user against some attacks from the opposite side. Pressing the FIRE Button again once the Ice Wall is erected will make the user fire weak buster shots as long as the Ice Wall is still on the screen or if the user runs out of Weapon Energy.

Ice Wall is very helpful for Mega Man, as he cannot double jump like Bass, and it can be stood on and used to pass by spikes safely and reach high areas. In some areas in a few stages, using Ice Wall will even be mandatory for Mega Man in parts that would otherwise be easy to clear with Bass's double jumps.

Ice Wall is also capable of floating on water, providing a makeshift platform for the user, which can be rather helpful if the player needs to traverse over waters that may have spikes or bottomless pits below. Unsurprisingly, when used underwater, Ice Wall will float up to the top of the water's surface (or a ceiling if the area is completely submerged). Once the Ice Wall floats on the water's surface or hits a ceiling, it will not budge for the player and will shatter after its preset time.

Cold Man's Ice Wall resembles more of an icicle than a pillar of ice, so it cannot be stood on and used for transport. If the player uses their Ice Wall on Cold Man in King Stage 3, however, it will make Cold Man jump as well as healing him by either three or six health bars.

Ice Wall is Burner Man's weakness. When the player uses Ice Wall on him while he is idle on the ground (mainly when he is using the Wave Burner), as well as doing damage, the wall can be pushed away to shove him into the spikes that surround his room for even more damage. If Burner Man is hit while using the Wave Burner, part of the attack will pass through the wall, potentially damaging Mega Man or Bass. 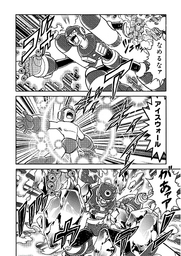 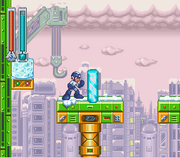 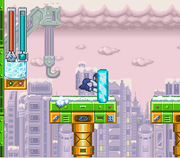 Mega Man sliding the Ice Wall across the platform. 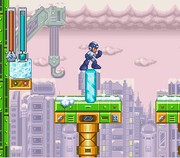 Mega Man standing on top of an Ice Wall. 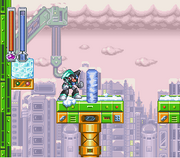 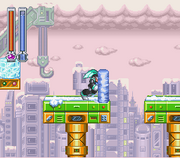 Bass sliding the Ice Wall across the platform. 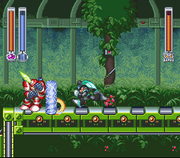 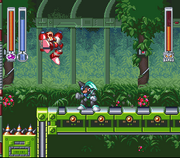 The result of pushing Burner Man into the spikes on the left: Burner Man jumps out in pain.