Impact Man, known as Pile Man (パイルマン, Pairuman) in Japan, is a Robot Master who appears in Mega Man 11. He's an all-purpose construction robot who specializes in piling. Impact Man is dedicated to his job and has never been one to leave a task unfinished. Even after being stolen and modified by Dr. Wily, Impact Man continued to carry out his duties as he rounded up a gang of construction robots and took up residence in an abandoned construction zone so he and his comrades could continue working on it.

Impact Man is a large robot whose body consists of three pile driver robots named Kui-ichiro (the oldest one, colored black), Kui-jiro (the middle child, colored yellow), and Kui-saburo (the youngest one, colored orange), who call themselves the Impact Brothers.[1] He has three spikes on his body, one atop his head and two more at the ends of his arms (one for each arm). He also has tailpipes on his shoulders. His upper body is colored orange on one side and yellow on the other side, and his lower body is colored black.

As for the individual Impact Brothers, Kui-ichiro is the leader and eldest brother who never fails to drive his point home, and usually takes control when the brothers are combined.  Kui-jiro, the middle brother, is indecisive and often has to ask Kui-ichiro for instructions.  He is also very unruly and can never be trusted to take the reins when the brothers are fused together as Impact Man.  Kui-saburo, the youngest, is the most responsible after Kui-ichiro, and takes charge of Impact Man if Kui-ichiro is tired. He always makes time for proper maintenance, which keeps his spike spotless, shiny, and sharp.

Impact Man's battle consists of a number of attacks in which he'll try to impale Mega Man with his drill spikes. Usually, he will dash across the room to try and ram into Mega Man with his spikes. After defeating Impact Man, Mega Man gets a special weapon called Pile Driver that mimics this attack. Oftentimes Impact Man will try to jump on Mega Man; due to his heavy weight, he can stun Mega Man when he lands, unless Mega Man jumps before Impact Man hits the ground.  Impact Man will also sometimes jump into the air and turn into a three-sided drill, after which he'll jump across the room in an attempt to crush Mega Man. He'll also leave behind a spike wherever he lands.

When he's lost most of his health, Impact Man will activate his Power Gear and turn into a gigantic jackhammer. In this form, Impact Man will jump around the room and generate massive explosions by slamming his enlarged spikes into the ground. After doing this three times, Impact Man will break apart into nine Impact Brothers who will fly across the screen. Impact Man will then respawn in his normal form and continue the battle.

In the Superhero difficulty, Impact Man's attacks are much faster and do more damage. He also has less cooldown between his jumps, and he can enter his Power Gear form earlier in the fight with four attacks instead of three before reverting back. 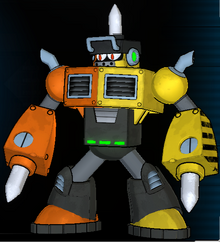 A construction support robot built to withstand the toughest working conditions, Impact Man mainly works on the foundations of construction projects. His body is made up of three independent pile driver robots who call themselves the Impact Brothers: Kui-ichiro, Kui-jiro, and Kui-saburo.

He never hesitates, and always rushes to action.

His motto is "Just push through!" so once he's accepted a job, nothing can stop him from smashing through in record time.

Usually Kui-ichiro, the oldest of the Impact Brothers, takes control when they're combined into Impact Man, but sometimes the youngest, Kui-saburo, steps in when his big bro is worn out. Meanwhile, Kui-jiro is the unruly middle child and can't be trusted to take the reins.

Retrieved from "https://megaman.fandom.com/wiki/Impact_Man?oldid=272483"
Community content is available under CC-BY-SA unless otherwise noted.