Varies, he changes elements every turn.

Incentas (エンシェンタス, Enshentasu) is a six-armed boss in the game Mega Man X: Command Mission. He is able to switch elemental properties when the situation calls for it.

Incentas has an appearance inspired by a genie and possesses three faces connected by one rotating head. His six hands float around him, disconnected from his body. His torso is composed of energy, which corresponds to the elemental alignment he is utilizing. He has three distinct forms, which his body adapts to during battle:

As Incentas does not appear for very long, his personality is not expanded upon. However, it is a reasonable assumption that he thinks highly of himself. He was amused and excited when the heroes fell into his trap, and he was not afraid to throw his life away in order to defeat them. He seems to know quite a bit about Supra-Force Metal since his ally in the same area, Shadow, was using it; Incentas also implies before battle that he became stronger than Shadow due to using more of the mineral than him.

X and his allies went to Gimialla Mine looking for Supra-Force Metal, but it was actually a trap. Once they reached the lab, Incentas barred the door behind them, trapping them inside. After a strenuous fight, Incentas sets off the self-destruct mechanism for the lab. As he was about to teleport out Spider tackles him from the side, pushing him against the door. Figuring that the combined explosion of two Reploids would blow the door open, Spider seemingly "sacrifices" himself so that X and the others could escape. Incentas was obliterated in the resulting explosion.

First Encounter at Gimialla Mine

??? (Incentas): Not even Shadow could manage to slow you down, eh? I guess even with the Supra-Force Metal that the Commander gave him, he is, after all, just a Maverick Hunter who defected to our side.

??? (Incentas): Fools! You've fallen right in my trap. Behold! I am Incentas!

Incentas: Yes! There isn't a scrap of Supra-Force Metal to be found here. It was all misinformation, designed to lure you Resistance cronies in!

(An electric barrier is erected behind them.)

Incentas: You're trapped like mice in a cage. No other Reploid has the ability to warp into this structure apart from yours truly.

Zero: Incentas, you really think we're going to lie down and surrender?

Incentas: The amount of Supra-Force Metal I've applied makes Shadow pale in comparison! Come forth and meet your destruction! 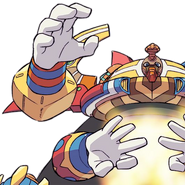 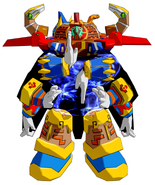 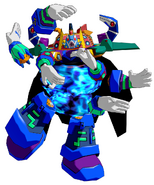 Illustrator Comments
"Initially, Incentas only had four fingers on each hand, but I got a sudden phone call saying, 'We want you to put five fingers on each hand!' I couldn't believe it. Did they know how many hands this guy has!?" -Ryuji Higurashi [2]

Retrieved from "https://megaman.fandom.com/wiki/Incentas?oldid=351509"
Community content is available under CC-BY-SA unless otherwise noted.