The Indie Proof (ここうのあかし, Kokou no Akashi, "Proof of Isolation") is the name of two items in Mega Man Star Force 2. The first is a strange object granted to Solo in the storyline, with a power so intense it rivals the OOPArts, and the second is an extra item obtained by Geo Stelar and Omega-Xis after collecting the six Indie Fragments (ここうのカケラ, Kokou no Kakera, "Fragments of Isolation") that can be collected after the main storyline is completed.

Solo's specific Indie Proof, the "Indie Darkness" (ココウノヤミ, Kokou no Yami), (according to the official Satellite Server website), was first proffered to him by Dr. Vega - it would serve as an equal measure of power opposite the OOPArt Mega Man had just mastered. Solo initially rejects the idea - he is reluctant to accept any measure of "help" from the Doctor (he earlier accepted the Kamikakushi solely due to it being lost Mu technology). His later confrontation with Mega Man leaves him soundly defeated.

Later, Solo is found within the Un-Dimension, brooding over Mega Man's statements regarding friendship. After a moment, he is joined by Hollow, who again offers him the Indie Proof. Solo begins to restate his rejection when Hollow cuts him short by pointing out that the Indie Proof can only be used by someone without any Link Power. He finished with the statement that Solo doesn't have to accept it if he wants to keep his Link Power, which Solo immediately took offense at, being galled into accepting the Proof. Hollow transferred it to him, but, upon absorbing it into himself, Solo collapsed in pain. As he writhed in agony, Hollow pointed out that his body would take some time to be accustomed to the Proof, and left.

Solo later awoke and appeared in Wilshire Hills, where Hollow had summoned Murian soldiers to attract Mega Man to the scene. In the ensuing fight, Mega Man found himself unable to so much as damage Rogue, and even on the verge of being slain, if not for a timely intervention from Harp Note (who had earlier severed her BrotherBand with him).

Rogue disappears from the narrative until Mega Man and Harp Note reach the center of the Bermuda Triangle, where the Murian continent had been sealed - he appears after Mega Man defeats Hollow. However, Harp Note's restored and enhanced BrotherBand gave Mega Man the power to overcome Rogue EX. However, the victory was only just so, as the sheer exertion from both fighters left them unable to do anything when Dark Phantom stepped in and appropriated Mega Man's OOPArt.

Much later, during the events of Mega Man Star Force 3, Solo gained a new ally in the form of the Wizard, Laplace - a curious development, considering Rogue's distaste for company or partners (or outside help at all). Laplace's primary contribution to Rogue is the powerful Laplace Blade, which supplants Rogue's original, Indie Proof-based Sword.

The Indie Darkness is an item of unknown make, though apparently in the same class as the three OOPArts. After Solo integrated it, the Indie Proof granted him three primary enhancements: a boost in his physical power as Rogue, the Mu Rejection Barrier, and the greatsword to which Rogue appended his name.

The Mu Rejection is a powerful forcefield that reflects everything and promotes the rejection of interaction with people, based on the requirements it takes to acquire the Indie Proof in the first place. It can be assumed that it is manifested at the users discretion. The Rogue Sword is a powerful blade that, in addition to being powerful in itself, can channel energy and release it either as a shockwave or an explosive impact.

Indie Fragments and the Rogue Tribe

The Indie Proof acquired by the Player is given no particular designation in the Satellite Server (Reasonably assumed because of being an extra item in the game and not a canonical event), though it differs from Rogue's Indie Darkness in several notable respects - not primarily because Geo and Omega-Xis have to assemble it.

Upon completion, Geo's Star Carrier receives a mysterious e-mail from an unknown source (the headshot is of a Guide-style Mr. Hertz) detailing the abilities of the newly created Proof.

In order to achieve the Indie Proof, the Player must take each of his Indie Fragments and transfer them into his Brother Band slots - if any Real Brothers are registered, their information must be overwritten if all of the Frags are to be input. Upon completing this, the Indie Proof generates a unique object very similar to a Friend Card, instead referred to as the "Badge of Loneliness". The Badge of Loneliness works very much like a Tribe Card, being selectable from the Battle Card array in battle, however it has no "ability" counterpart.

This is due to the fact that this Indie Proof acts as a modification of Mega Man's OOPArt - when the Badge of Loneliness is activated, Mega Man engages in an altered form of Tribe-On. Depending on the version, he will enter into either the Zerker, Ninja, or Saurian Tribe-On, but his form will be notably different: instead of the colors of the Tribe itself, the color scheme will be Black, Red, and Purple. This version of the Tribe-On is referred to as the Rogue (Burai (ブライ, Burai)) Tribe, and Mega Man appends the title Rogue to the end of his name, as he does with the other tribes.

Rogue Tribe is functionally a variant of Mega Man's premiere Tribe-On - in addition to the color scheme change, Mega Man's Tribe abilities will remain largely untouched, though he will receive his own Mu Rejection Barrier, and the elemental boost will be replaced with an attribute boost, giving sword cards a +50 attack boost. With the loss of the Elemental boost, however, comes the loss of the Elemental weaknesses - Mega Man cannot be forcibly divested of his power by an outside force, but he can still be stripped of his power by his own doing. The Rogue variation of the Link Force Big Bang cannot be activated by a standard counterstrike; instead, the countering method involves preempting an opponent who uses a dimming-card in a Versus Battle (it will simply be a recolored version of the regular LFBB) - this will cancel out Rogue Tribe. While in Rogue Tribe, Mega Man is denied the use of Mega Cards - as a reference to the self - actualizing nature the Indie Proof promotes and requires.

The six Indie Frags may be collected by Geo and Omega over the course of their adventure, though all of these efforts are completely optional - indeed, as stated above, the Indie Frags can't be collected until after the fall of Ra Mu. On their own, they are largely useless to Mega Man, though they prove to have odd effects on the other beings who are in contact with them.

The locations of the Indie Frags are as follows:

Notably, the Rogue Tribe may be achieved without the use of the Indie Frags. By using a Wave Command Card, Mega Man can gain the benefits of Rogue Tribe in addition to massive power boosts, such as HP and Booster Stats. All other aspects of Rogue Tribe remain the same, however. 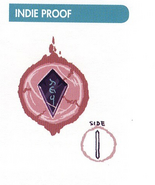 Concept art of Indie Proof.
Add a photo to this gallery

Retrieved from "https://megaman.fandom.com/wiki/Indie_Proof?oldid=286976"
Community content is available under CC-BY-SA unless otherwise noted.