"Are the other investigators useless fleas? That's the only explanation as to why I have to clean up their messes... But wait... Why are you here anyway? Don't tell me you destroyed my sweet Illumina... Maverick! I haven't even tested her! And I was thinking that I'll destroy all the thick-headed so-called "authorities" with her...! You will die!!"
―Infinity Mijinion, Mega Man X6

Infinity Mijinion (インフィニティー・ミジニオン, Infinitī Mijinion) is a water flea-based Reploid created by Gate to test pilot large manned weaponry. He was later resurrected by Gate to serve as one of his Nightmare Investigators, placing him in charge of the Weapon Center.

Mijinion was a Reploid created by Gate to act as a test pilot for large manned weapons. The photoconductive material built into his body allows him to analyze and process information and machinery with incredible speed and accuracy, equal to that of several super computers. He had a high success rate, and produced many excellent results. However, Mijinion was often arrogant and hasty, and would completely ignore the testing program, which put many of his associates in peril. Not even Gate was able to rein in these impulses. Eventually, Mijinion was killed in a sabotaged test that was made to look like an accident. During the Nightmare Incident, Mijinion was resurrected by Gate as one of his Nightmare Investigtors and sent him to a weapon factory. Once there, Mijinion immediately began constructing a giant Reploid called Illumina.

Though bright, Infinity Mijinion was very rude and haphazard. He loved testing powerful weaponry but was never concerned with the safety of others. Even Gate couldn't restrain his self-serving ambitions. Mijinion was also angered by the destruction of Illumina, which he didn't get a chance to test. Mijinion wished to use it to destroy all those he considered as "idiots" who had slighted him.

Mijinion also has some loyalty to his creator Gate, despite disobeying his requests to tone down his dangerous experiments. In his original Japanese dialogue with Zero, Mijinion wants to destroy him because he will win praise from Gate for it, as well as getting revenge for the destruction of Illumina.

Infinity Mijinion will fly around the room with his thrusters, using his Ray Arrow attack to make energy arrows fall from above and shoot purple energy arrows. His notable ability is to create multiple copies of himself simultaneously. Meanwhile, his clones will release multiple luciferase bubbles that home in on their targets. His final attack is the Giga Ray Arrow, which whill cause many lasers to rain down. Though his main weakness is Guard Shell, sometimes it is better to use the Nova Strike if X is equipped with the Ultimate Armor, but it may be a risky move to use, as Infinity Mijinion's speed when he flies back from getting hit by the Nova Strike is the same as it, so the player is almost guaranteed to take damage from touching him when the move's animation ends. With Zero, Infinity takes more damage from the Z-Buster than the Z-Saber.

X: Infinity Mijinion! You are one of the investigators of the Nightmares, aren't you?

Infinity Mijinion: You seem to be hard to deal with... Why must I cover up for the lack in ability of the other investigators? Hmm? How did you come this far? Don't say you destroyed my sweet Illumina...

X: I destroyed such a dangerous Reploid!!

Infinity Mijinion: No! I was still conducting a test or two on her...! I wanted to use her to destroy all the idiots! Now I'm angry, and that means you're dead!

Zero: You heard wrong. You are Infinity Mijinion, one of the investigators for the Nightmares, aren't you?

Infinity Mijinion: Are the other investigators useless fleas? That's the only explanation as to why I have to clean up their messes... But wait... Why are you here anyway? Don't tell me you destroyed my sweet Illumina.

Infinity Mijinion: Maverick! I haven't even tested her! And I was thinking that I'll destroy all the thick-headed so-called "authorities" with her...! You will die!!

Infinity Mijinion appeared as part of Sigma-2's army of Mavericks who attacked the Sky Patrol, using his cloning ability to surround a pair of Robot Masters: Snake Man and Spark Man. He later departed in order to invade other worlds and seed them with Sigma's Unity Engines. 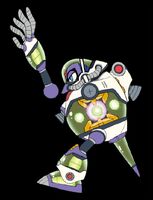 Retrieved from "https://megaman.fandom.com/wiki/Infinity_Mijinion?oldid=355546"
Community content is available under CC-BY-SA unless otherwise noted.