In Mega Man X5, yellow Reploids appear in the stages of Shining Firefly, Spiral Pegasus, and Volt Kraken. Also, U-555 releases some from its mouth when pushed to the back of the screen in the first part of Tidal Whale's stage. In addition to restoring some of the player's life gauge, they also bestow one extra life as thanks for being rescued. They reappear whenever the player enters the stages they are present.

In Mega Man X6, each of the eight main stages contain 16 Reploids needing help, having a total of 128 Reploids. All of them are named and some give items when rescued. A Nightmare Virus can turn these Reploids and Wolfloids into Mavericks, and if this happens, they will attack the player and can no longer be rescued. If infected Reploids aren't killed, they will disappear and be marked "MISSING" on the Rescue Screen. If the player decides to kill the Reploids, they will be marked as "DEATH" on the Rescue Screen. Unlike Mega Man X5, these Reploids will not reappear after being rescued or infected by a Nightmare Virus. In addition, if the Reploid is carrying an item, and gets infected, the item will disappear and cannot be gained again.

Like Mega Man X6, each of the eight stages from Mega Man X7 has 16 Reploids needing help, and some give items as thanks. If the Reploids are hit by enemies, they will pass away and can no longer be rescued. Each stage has Reploids with one Life Up, two Weapon Ups, a 1-UP and two Power Up Chips. 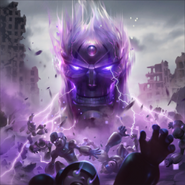 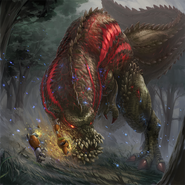 A Reploid destroyed by a Deviljho in TEPPEN. 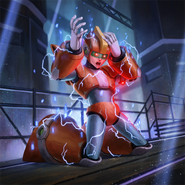 An infected Reploid in the TEPPEN card Machine Virus.