An integrated circuit, I.C. for short, also referred to as a chip or a microchip, is a set of electronic circuits on one small flat piece (or "chip") of semiconductor material that is used in electronic devices such as computers and robots.

Although unnamed in-game, it is possible that the chips that Dr. Wily used to activate the Wily Numbers rebuilt by Ra Moon in Super Adventure Rockman are I.C. chips. These chips have the same appearance of Special Weapon chips (it is unknown if they are different chips or the same) and Information Cards.

I.C. chips are mentioned in some issues from the comic book series. Mega Man himself says he has an integrated circuit in issue 23, asking Break Man to not destroy it.

In the comic book crossover Worlds Collide, Dr. Wily & Dr. Eggman are able to recreate any of the fallen Robot Masters with their integrated circuits intact due to the use of the reality warping Genesis Wave. Mega Man and Proto Man also noted that the complexity of integrated circuits makes them nearly impossible to recreate, Wily having accomplished this previously only with the assistance of Ra Moon.

After Mega Man was critically damaged trying to use two Mega Busters on Ra Moon in issue 33, Dr. Wily, while working with Dr. Light, had rerouted most of Mega Man's power systems in order to keep his I.C. chip intact. Mega Man would later extend this same courtesy to Wily's creations, making sure not to damage the I.C. chips of the fallen third generation Robot Masters so that they could later be rebuilt for peaceful purposes.

The second generation Robot Masters later had their IC chips removed (albeit reluctantly) on Dr. Wily's order, with them being inserted into the Diverse Operations Circuit (DOC) Robot. As a side-effect of them all being inserted at once, the Doc Robot's attack patterns were completely random and it frequently spoke in multiple voices.

During Legends of the Blue Bomber, Mega Man stored the I.C. chips of the defeated Robot Masters inside Rush, instead of sending them through the teleporter he had on him for retrieving the Energy Elements due to the risk of corrupting the IC Chips the latter posed due to it being made specifically for transporting Energy Elements. Before going to the Wily Castle, they are removed to keep them safe and later used to repair the Robot Masters.

In Irregular Hunter Rockman X, X is seen taking Sting Chameleon's I.C. chip to use Chameleon Sting. However, destroying a Reploid to obtain the I.C. chip isn't a requirement for X to obtain a Special Weapon, as he gains Storm Tornado from Storm Eagle's buster and Flame Mammoth gives a chip with Fire Wave. 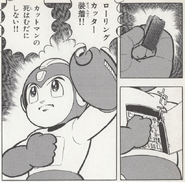 Retrieved from "https://megaman.fandom.com/wiki/Integrated_circuit?oldid=337590"
Community content is available under CC-BY-SA unless otherwise noted.