"Let's live together, in a world where only Reploids exist..."
―Iris on her deathbed, her idealistic world to live in, Mega Man X4

Iris (アイリス, Airisu) was a Reploid from the Mega Man X series that worked as a Navigator for Maverick Hunters. She was also Zero's love interest and the younger twin sister of Colonel. Like her brother, she speaks with an Australian accent in the English language versions of Mega Man X4.

Iris appears as a young-looking female brunette Reploid with green eyes and very long hair, comparable to Zero's length. Her armor consists of a blue and red scheme with yellow accents and is modeled into the form of a dress, her limbs being white, her boots white, and her hands appearing to have segmented knuckles. In X4, her boots gain a black outline and have a defined lavender color with the addition of a red beret on her head. In Mega Man Xtreme 2, Iris appears to be slightly younger than her previous appearance (as Xtreme 2 chronologically predates X4), and along with lacking her beret, she has a small section on her upper chest with the insignia of the Repliforce army.

After taking Colonel's core into her body in Mega Man X4, she appears as a Ride Armor-like being with a purple color scheme and a pair of wings. It is unconfirmed as to whether she entered a Ride Armor vehicle or became a similar being herself. However, she reverts to her original form after her defeat, suggesting that she was inside an armor.

Repliforce scientists attempted to develop an ultimate fighting Reploid with both a high fighting spirit and peace-loving heart, similar to X, but the differences were ultimately considered irreconcilable and the project was considered a failure. The scientists then decided to split them up into two Reploids, resulting in the creation of Iris and her brother Colonel. Her half was of the peaceful arbitrator, and Colonel's was of the strong-willed fighter.

The Erasure incident was Iris' first mission as a Navigator for the Maverick Hunters. She took the roles of both Navigator and item development by making power-ups out of the Maverick's DNA Souls. In the Xtreme Mode ending, Zero feels bad that her first mission was a tough one and the Colonel will blame him.

When the Repliforce was labeled Maverick after the Sky Lagoon incident, both X and Zero were assigned different missions to gather information about Repliforce's coup and to cut off their support lines. Iris assisted Zero on his missions as being his operator, similar to during the Erasure incident. However, Iris herself was part of Repliforce while her brother, Colonel, was Repliforce's second-in-command and therefore an imminent target for the Maverick Hunters. When the two of them battled in the Ceremony Hall of Repliforce's command center, it was Iris who stopped the two Reploids from terminating each other by begging her own brother to stop, since Zero had previously saved her life after the Sky Lagoon had crashed. Colonel, who had always regarded Zero as a friendly rival, backed off. Zero, on the other hand, stated that someone had to stop Repliforce at all costs, much to the grief of Iris.

When Repliforce's coup began, Zero rushed to the space port to stop the ascension of the military troops to the newly constructed space station of Repliforce, Final Weapon. There, he battled Colonel again, this time killing him. After that, Zero traveled to Final Weapon itself after discovering that Iris was missing from the Maverick Hunter HQ. He eventually encountered by Iris, who was blinded by the grief of losing of her brother and anger for Zero terminating him. She had salvaged Colonel's control chip from his remains, fusing it with her own programming, thus causing her body to transform into a massive winged Ride Armor-like combat form which Zero was reluctantly forced to battle. Even though Zero didn't mean to, he damaged the exterior power core of the structure, resulting in the destruction of the armor. In addition, Iris' incorporation of the salvaged control chip for Colonel also fried her programming. Thus, the damage Zero dealt to Iris' was irrepairable. Zero hurried to Iris's body, but it was too late to save her. And while Iris layed dying in Zero's arms, she whispers to him that she did all this because, even though she knows it is nothing more but a fantasy, she wanted to live in a Reploid-only world together with Zero. After Iris says her final goodbye to her friend, Zero tries to get her to wake up, but fails and has a break down, questioning what he is even fighting for.

Sigma would later antagonize Zero further, by revealing his involvement in the whole ordeal. He even goes as far as to taunt him by saying "Iris is waiting for you!" before their battle.

After Final Weapon is destroyed by General, Zero flies back to Earth in an escape shuttle, but he is tortured by the thought of being unable to save his friends.

Iris reappears as a memory in Zero's ending, where an image of her is seen by Zero as he lays dying and all he can do is quietly apologize to her.

As a normal Reploid, Iris is a skilled Navigator for the Maverick Hunters.

In her Combat Ride Armor form created with Colonel's core, Iris can fly freely and has two attacks:

In the now-cancelled Korean MORPG, Iris appears working as a Navigator (along with Alia) for the UCA (United Continent Association) in the games first teaser trailer. As this games story is said to take place in the far future where the characters from both the Mega Man and Mega Man X series have long since passed away, this Iris (much like the other series robots and Reploids appearing in the game) is a copy/recreation, embedded with the DNA Soul of the original.[1]

Iris appears in the crossover RPG as an event character. She makes her only direct appearance in Chapter 29, "An Unbeatable Love" (負けない、愛 Makenai Ai in the Japanese version).

With X and Zero shocked to see Iris alive and well, X recognizes her as the younger sister of Colonel, and "the girl from that Repliforce incident", which suggests that the events of this chapter take place after Mega Man X4.[2]

She still wishes to live in a world only composed of Reploids together with Zero, but he reminds Iris that such a world is nothing more than an illusion. He is then asked by her if a Reploid only world is meant to be his purpose and desire, part of the reason why Iris is present. Afterwards, Zero suffers an emotional breakdown, pondering about whether or not a Reploid only world was really the reason he was fighting for, with Vile taunting him for an A-Class Hunter getting emotional over Iris's wish, claiming that he and Zero are, in truth, the same. X reminds him of how he promised to stop the former if he ever doubted their ideal, and expresses how he didn't want the latter to feel like that before himself. Zero becomes paralyzed with anguish and is unable to move.

Confused about Iris at first, the other characters present then realize that Zero is in trouble, and X asks for their help to protect him from danger, while attempting to defeat Vile at the same time. The game splits the winning conditions down to two options: reach Zero by the ninth turn to heal him or defeat Vile, otherwise a game over will be declared. Until then, X's unit is paralyzed and unable to fight.

After any of the other party members reach Zero and heal him, he eventually recovers from his emotional breakdown and recalls his duty as a Hunter, and tells Iris that a Reploid only world is impossible. Aura from .hack appears and states that Iris and her feelings are not supposed to be present, hence causing her to fade away. Before she vanishes however, she gently suggests to Zero that she is happy to see his conviction didn't change, and encourages him to never give up before bidding him farewell. His resolve restored, Zero confidently declares he will rejoin her someday.

Iris is mentioned again by X in Chapter 37, where the latter comments about Vile using her back in The World, as well as how he hurt Zero emotionally.

For unknown reasons, Iris was not cloned by Sigma-1 during the events of Worlds Unite, a fact that Zero commented on during the battle between the Maverick Hunters and their allies and Sigma's Maverick Army. Though he and his comrades recognized a number of fallen enemies amongst Sigma's minions, Zero noted that neither Iris nor Colonel were among them.

In the manga Iris works for the Repliforce. She helps Zero after his battle against Jet Stingray. 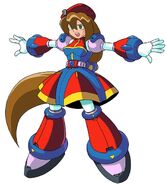 Iris in the opening of Mega Man X4.

Iris seen by Zero as he lay dying in his ending of Mega Man X5.

Iris as originally seen by Zero among the flow of memories he saw before his death in Mega Man X5.

Iris as a Navigator in Mega Man Xtreme 2. 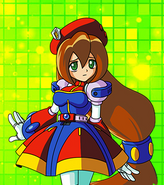 Iris in Rockman ×over. 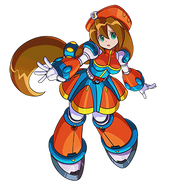 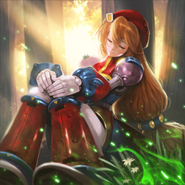 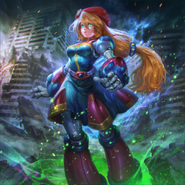 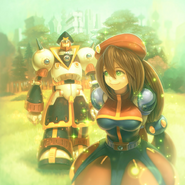 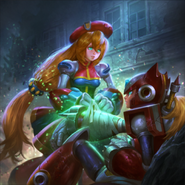 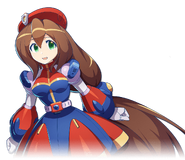 Iris in the Rockman X4 manga.

Zero loses himself in pain after Iris's death in the Rockman X4 manga.

Illustration of Iris by Yoshihiro Iwamoto

Illustration of Iris by Yoshihiro Iwamoto made in support for the Hobby-Rock event.

Artwork of Iris made in commeration of Mega Man X4's 20th anniversary.

Illustration of Iris by Yoshihiro Iwamoto.

Iris in a Valentine's Day picture 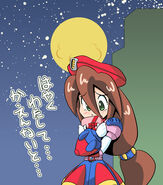 Retrieved from "https://megaman.fandom.com/wiki/Iris?oldid=315747"
Community content is available under CC-BY-SA unless otherwise noted.