Iris.EXE (アイリス, Airisu) is a main character in Rockman.EXE Beast. Despite her appearance, she is a NetNavi and the younger sister of Colonel.EXE, and is seen as an older sister by Trill.EXE. She is Colonel’s emotional data given form, and is able to go from the real world and cyber world at will.

Like her video game counterpart, Iris is the brother of Colonel and is his emotional data given form. However, in the anime Iris is a denizen of Beyondard rather than Earth and also acts as an older sister figure to Trill. Rather than trying to convince Colonel to cease his villainous ways with the WWW like in Rockman.EXE 6, in the anime Iris instead focuses on protecting and regulating Trill, who often goes off on his own and causes Rockman to go berserk when he merges with him in Beast Form, though Iris can qualm him. Unlike in the video games, Iris has a unique appearance that she takes on when she is in the cyberworld.

Iris debuts in an Ameroppa military base Enzan Ijuin and an Ameroppa officer were exploring. After the base was put in emergency lockdown, Enzan and Iris find themselves in the control room, where Blues plugs into the control panel and is sent to an unknown dimension. She's last seen in the episode watching Glaga Beast Rockman easily destroy Zoano SparkMan and defeat Zoano PharaohMan, neck pinching Enzan to make him pass out after he witnesses the power of Beast Form. NetNavi Remodeling Scheme

She appears in episode 7 where Netto meets her for the first time. Later, she makes her first appearance in NetNavi form and asks Trill to come back to Beyondard with her. He refuses, and the two are attacked by Zoano PharaohMan, with Blues saving them. Blues is curious about Iris' intentions with Trill, and responds that Trill is the key to Rockman's Beast transformations, but she is the one who can help Rock control those forms. Capture Rockman!

She appears in episode 8, where she again asks Trill to come back to Beyondard with her. He refuses, and she enrolls at Netto’s school (and as a result, ends up in Netto's class) where all the boys become smitten with her. She later confronts Netto at the school rooftop and questions him if he and Rockman are special. Netto responds that he and Rockman are friends, so the two are special in some way. She asks about if he knows why Trill can't seem to separate from Rockman, with Netto responding that he doesn't. Iris asks if she heard correctly that Netto is special, and Netto says he is. She then asks if he ever thought the same thing could apply to Trill, but Netto again responds that he hasn't. Iris provides a simple response: that there's a mystery surrounding Trill. Netto is curious to know what this mystery is, but then all the boys from their class show up and drive Iris off. She later appears when the gang go to check up on Rockman at the lab - where Lan reveals that Trill is responsible for the Beast transformations - and Iris wishes Rockman a speedy recovery. Green-Eyed Transfer Student

She later appears on the top of a cargo ship, overlooking Meiru, Netto, their NetNavis, and Trill with a worried expression on her face. She later appears on the ship when Netto drops his PET when Zoano LarkMan.EXE attacks. Trill tries to get inside and initiate Beast Form, but Iris picks it up and tries to prevent him. Trill refuses and dives into the PET, which she gives back to Netto. Aiming for Trill

She appears in episode 11.

She appears in episode 12.

She appears in episode 13.

She appears in episode 14.

She appears in episode 19.

She appears in episode 20.

A JammingMan masquerades as Iris in episode 25 of Beast+.

Iris' appearance in the anime. 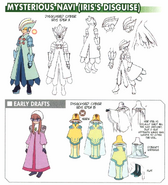