Isoc (アイゾック, Aizokku) is an enigmatic character from Mega Man X6. He first appears after the Opening Stage, warning the populace of the threat of the Zero Nightmare, and encouraging Reploids to join in the cause to obliterate the new Nightmare virus. In reality, however, Isoc is actually working as a subordinate of Gate, the scientist responsible for the Nightmares.

Isoc is a Reploid with an elderly appearance. His beard and hair are both cylindrical in shape, and he has sharp eyebrows that point upwards. His eyes are completely red with black outlines. He has black and brown armor, and he wears a long lab coat similar to Gate's but with grey metal shoulder pads.

Isoc is a confident researcher and a skilled public speaker. He assisted Gate in decrypting Zero's DNA program and manipulating public perception of the events of the Nightmare Phenomenon to blame them on Zero. He held great hatred for X and an odd fascination with Zero, claiming that he knew him "inside and out."

After X's first encounter with High Max, Isoc gives a speech directed at all Reploids on Earth, in place of Gate. He blames the Nightmare Phenomenon on the "ghost of Zero" and announces that eight Reploids known as the Nightmare Investigators will be deployed to research the areas most affected by the phenomenon. X is infuriated that Isoc blames the chaos on Zero despite his valiant sacrifice, and the Maverick Hunters begin their own investigation of the situation.

After the first Investigator is destroyed by the Maverick Hunters, Isoc notifies his boss, Gate. Isoc advises that they look further into Zero's sudden reappearance, but Gate dismisses it, saying he is no longer interested in Zero's data and that High Max will defeat them soon enough. He also accuses Isoc of being too obsessed with Zero.

If X or Zero defeats High Max in one of the Nightmare areas, a cutscene will show of Isoc's reaction. For X, Isoc shows his hatred and frustration, threatening to destroy X himself before retreating. For Zero, Isoc is enthralled by Zero's superiority and laughs maniacally; Zero then tries to attack Isoc, but he stops him with an energy barrier before taunting and retreating. Following this development, Gate personally contacts the Maverick Hunters and invites them to storm his laboratory.

After X or Zero defeats Gate, they discover Isoc's body further within the laboratory. Mysteriously, his Reploid soul seems to have left his body entirely, leaving him a husk, similar to the Erasure incident. If Zero is present, he hears a mysterious voice calling him the ultimate robot, which he brushes off with little thought. The Maverick Hunters realize they have no time to check on Isoc, and they immediately leave to go after Sigma. Isoc is not seen again for the rest of the game, and his ultimate fate is unknown.

"Attention all Reploids on Earth! As you all know, these are chaotic, disturbing times. The "Nightmare" is upon us. It shows Reploids a kind of "dream" for human beings... no. It's a "Nightmare". The Nightmare makes Reploids confused. In the worst case, they may malfunction or delete themselves. Due to the Colony incident, there are few Reploids or humans are left on the Earth... We won't accept sacrifice anymore! This would bring us to the Earth Crisis. Taking the matter seriously, we have sent investigators to the 8 suspected areas to uncover the mystery of this Nightmare phenomena. It's said that the Nightmare phenomena are cause by... a ghost of Zero... known as an ace Maverick Hunter..."

"Now, I'd like to call on volunteers! Unite with us, and help our cause! Work for these eight investigators!! Our goal is to wipe out the Nightmare... and to delete the Zero's ghost! Come together for our future!! This High Max will lead the mission. We guarantee your safety if you join us. Both Maverick Hunters and Reploids now suffer. Let's preserve our future together! We're waiting for you! Everyone!"

After defeating High Max in a secret area as Zero

Zero: What makes you laugh?

(Zero charges and Isoc counters by firing a purple beam of energy, freezing him in place)

Isoc: Zero... I know you inside out... Hmm. Since I found out you're alive, I can capture you at any time. But first I must bring High Max back.

Isoc: Hmm. What can you do as you are now? I won't escape. I'll see you soon. I promise!

Signas: Are you all right? Zero! We'll send a rescue team immediately! High Max won't be a threat for a while. So you can come back to the Hunter Base at once!

Alia: It's some kind of force field. It seems to take time to release it. Can you move if it isn't released?

Alia: Aw? The force field... It seems to have a timing device. It might be released in due course. But it's strange... Why did he try so hard to trap Zero? What was his intention?

After defeating High Max in a secret area as X

High Max: No! I can't believe this. I'm superior to him in every respect, the speed, the power and the body... An old robot like you can't beat me... This can't be true!!

Isoc: You ancient piece of junk, it's not over! I'll destroy you myself! For the time being, farewell!

Signas: X! Cool down! We don't want to lose you. You may be damaged in the battle. Return to the Hunter Base, now! 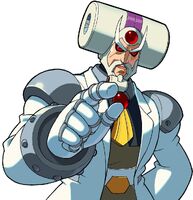 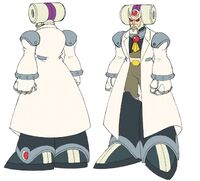 Isoc in the Rockman Online trailer. 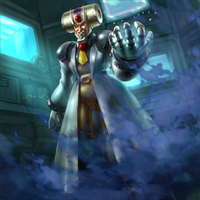 Designer Comments
"I was thinking about a certain scientist while designing this character. The horizontal piece on his head is supposed to be hair. I also gave him a beard and something that looks like a necktie." - Haruki Suetsugu[1][2]

Retrieved from "https://megaman.fandom.com/wiki/Isoc?oldid=341569"
Community content is available under CC-BY-SA unless otherwise noted.