An item (アイテム, aitemu) is an object within the games that can be collected by the player's character that are often beneficial. Items have varying functions, like recovery and equipment, and some are needed to progress further into the story.

Life Energy (ライフエネルギー, Raifu Enerugī), also known as Life Recovery (ライフ回復, Life Recovery), Energy (エネルギー, Energy), Energy Pellet, and Power Capsule, is an item that recovers health. It usually comes in two sizes, small (小, shou) and large (大, dai). Some games have extra large (特大, tokudai) versions of them that usually restore to full health. Depending of the game, the small ones traditionally restore between 2-4 units of the player's health, while the big ones restore between 8-10 units.

In Mega Man ZX and Mega Man ZX Advent they are called Biometal Energy (ライブメタルエネルギー, Livemetal Energy in Japan), and the larger ones can be sliced with a saber weapon to create smaller and different types of energy.

Soul Item (ソウルアイテム, Souru Aitemu) is an item from Mega Man Xtreme 2. Soul Items are DNA Souls that can be collected and exchanged by Parts in the shop. They appear in two varieties, Life Soul and Energy Soul, which have the same recovery effects of the Life Energy and Weapon Energy. 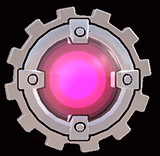 Gear Recovery (ギアリカバリー, Gear Recovery)[1] is a gear shaped item exclusive to Mega Man 11 which is designed to work with the Double Gear System to lower the overheat meter caused from using Power Gear or Speed Gear. It comes in a small or large form, removing a small or large amount of heat depending on which one is picked up.

A 1-UP, also known as Extra Life, is an item present in all platform Mega Man games that grant an extra life to the player. The player can have a maximum of nine lives in most appearances, usually starting with two lives. However, when the number of lives says 0, dying once will trigger a Game Over, so 9 lives counts as 10 lives before a Game Over. The EX Item increases the amount of initial extra lives.

In Mega Man: Powered Up, it is named Stock Heart (ストックハート, Stock Heart) and has the shape of a heart. In Mega Man X8, extra lives are Retry Chips. In Mega Man Network Transmission, they appear as Backup Chips (バックアップチップ, Backup Chips "BckupChp"). MegaMan can only carry two at the start, but can increase the maximum to the traditional nine.

In the Mega Man Zero series, the item is called Z Panel (Zパネル, Z Panel), and like its name, it has the shape of a "Z". The Z Panel has two alternate appearances in Mega Man Zero 3, which can be set by using the Mod Cards #8 (

Life Up (ライフアップ, Raifu Appu), also known as Heart Tank, is an item from the Mega Man X and Mega Man ZX series that increases the maximum life energy capacity of whichever character obtains them.

Energy Up (エネルギーアップ, Energy Up), also known as Weapon Up (ウェポンアップ, Weapon Up), increases the maximum weapon energy capacity of whichever character obtains them. It first appears in Mega Man X5 as an item that can be created. In Mega Man X6 and Mega Man X7 they are obtained from some Injured Reploids, and in Mega Man X7 one is obtained by the character that gives the finishing blow against a boss. Much like with Life-Ups in these three games, only one character can collect each Energy Up that is found. In Mega Man X8, this is made easier by buying them as Chips in three different purchases per character.

In Mega Man ZX Advent, the BM Upgrade (ライブメタルアップ, BM Upgrade Livemetal Up in Japan) increases the Biometal gauge. There are four of them, located in the Oil Field 2, Highway 1, Quarry 3, and Bio Lab 2.

Tank, known as Can in Japan, is a recovery item from the original series that can be carried by the player to be used when needed. The first type to appear was the Energy Tank (E Tank) in Mega Man 2, which replenishes a player's life energy. The player can usually carry several of those at once, up to a maximum of four or nine, depending of the game.

Other versions include the Weapon Tank, which replenishes one of the player's Special Weapons; the Super Tank, which replenishes a player's life and the energy of all special weapons; the Mystery Tank (M Tank), which acts like the S Tank and has the bonus effect of turning all on-screen foes into Extra Lives if used while the player's character is at full health and all weapons have full energy. There are more variants, like Mini E Tanks and ? Cans. There are also L Tanks, used in Proto Man's Castle, Stage 4. It restores all of the users health. However, it refills it upon touch, unlike E tanks/cans that can be stored for a later use.

The Sub Tank is an item similar to the E Tank, but instead of being used once, it remains with the player and can be refilled after usage, usually by picking up more life energy when the player's life energy bar is already full. It appears in the Mega Man X, Zero and ZX series. In Mega Man X4, X5, and X6, the tanks fill with energy regardless of whether the player's health is full at the time a Life Energy capsule is obtained. Also depending on the game, using a Sub Tank may drain all of its saved energy despite the player having lost only a couple of units worth.

Yashichi (ヤシチ, Yashichi) is a recovery item that refills the health and the energy of all weapons. In Mega Man it can be found in the last stage, and in Mega Man 8 it is given by the Rush Charger. It is also commonly seen on Easy Mode in Mega Man 10.

Energy Crystal, known as Energen Crystal (エネルゲン水晶, Enerugen Suishou) in Japan, E-Crystal (Eクリスタル, E-Crystal) for short, is an item from the Mega Man Zero series that serves as energy resource for Reploids. In the games it is used to grow Cyber-elves, and occasionally as a currency. They are also used as the currency in the Mega Man ZX games and are used to repair Biometals in the first game.

Metal (メタル, Metal) is the currency from Mega Man X8, which is used to create Chips in Hunter Base's lab.

P Chip (Pチップ, P Chip) is a special energy item from Mega Man IV and Mega Man V that Dr. Light needs to be able to create items for Mega Man in his laboratory. They appear in two sizes and Mega Man can stock up to 999 P Chips. They were replaced by Screws in later games.

Screws (ネジ, Neji), also known as Bolts, are items that appear in Mega Man 7 to Mega Man 11, Mega Man & Bass, and Rockman & Forte: Mirai Kara no Chōsensha. They are used as currency to obtain items in shops.

The Special Weapon Item (特殊武器アイテム, Tokushu Buki Aitemu), also known as Weapon Item (ウエポンアイテム, Weapon Item) , is a blue sphere from Mega Man 2: The Power Fighters that appears after defeating a boss that leaves a weapon. The player must get the item to gain the special weapon, or else it will be lost. With two players, the first to take the item gains the weapon. The item also appeared in Mega Man's ending in Marvel vs. Capcom: Clash of Super Heroes, where he obtains the Magnetic Shockwave after taking it.

CDs contains data for the database from Mega Man & Bass. There is a total of 100 CDs hidden through the stages.

Score Ball (スコアボール, Sukoa Bōru), also known as Bonus Ball (ボーナスボール, Bōnasu Bōru) and Point Item (得点アイテム, Tokuten Aitemu), is an item that appears only in the first Mega Man game and its remakes. It increases the score in the end of the stage.

Support Item (サポートアイテム, Sapōto Aitemu) is an item from Mega Man 2: The Power Fighters dropped by Eddie that summons a support character when taken. The support that appears depend of the player's character, Rush appearing for Mega Man, Treble for Bass, and Beat for Proto Man and Duo.

DNA Core (DNAコア, DNA Core) is an item from Mega Man X7 and Mega Man X8 that is dropped by some enemies defeated by Axl's Copy Shot.

In Mega Man X7 it is a small glowing sphere with red frames around it. The item has two versions, the smaller granting a temporary ability, and the bigger temporarily transforming Axl into the defeated enemy. Both are activated on contact.

In Mega Man X8 it is a crystal-like item that allows Axl to temporarily transform into the defeated enemy. The player can choose when activate it.

Parts Panel (パーツパネル, Parts Panel) is an item from Mega Man Zero 4 that represents the parts used to create Chips.

Pack Item (パックアイテム, Pack Item) is an item from Mega Man Powered Up that unlocks content from the Construction mode.

"Piece of Scrap" is an item from Mega Man 9 dropped by the fourth of the eight bosses defeated. By analyzing it, Auto sees the robot's product code and discovers its period of use had expired and was scheduled to be scrapped.

The "Memory Circuit Board" is an item from Mega Man 9 dropped by the last of the eight bosses defeated. By playing back the robot's memory, Mega Man, Roll, and Auto see why Dr. Light's robots went crazy and discover that Dr. Wily was responsible. Dr. Wily steals the evidence and Mega Man goes after him in his Wily Castle, obtaining the board back after destroying the Wily Capsule.

Zero's parts (ゼロのパーツ, Zero no pātsu) are three parts of Zero's body that are with the X-Hunters in Mega Man X2. After defeating two bosses from the stage select screen, the three X-Hunters will challenge X to collect the parts from them, each moving around the stages with one part. Defeating the X-Hunters to retrieve the parts is optional.

If all three parts are collected, Zero will be revived by Dr. Cain. If X doesn't collect all of the parts, the X-Hunters will invade the Maverick Hunter Base and steal Zero's control chip and any parts X had collected, reviving Zero as a Maverick that fights against X in the last stage.

Shock Guard (ショックガード, Shock Guard) is an item that protects the user from spikes. However, if the user gets crushed by moving spikes, he will still die. They can be purchased from the shops from Mega Man & Bass, Rockman and Forte: Mirai Kara no Chousensha, Mega Man 9, and Mega Man 10.

In Mega Man X8, the Shock Guard returns as the Prickle Barrier and must be purchased in the R&D Lab. Like Shock Guard, it can only protect the player from spikes once - not once per character, but once per use. If the player uses it by stepping in the spikes, his character's health will be reduced to 1 and the character will instantly die if the player steps on spikes again.

Guard Up (ガードアップ, Guard Up) is an item from Mega Man 9 and Mega Man 10 that halves damage taken. Mega Man can buy it in the game's shop. It is not available for Proto Man and Bass.

1UP in the Rockman manga.

1UP in Rockman: Dr. Wily no Inbou.

1UP in Rockman 4Koma Dai Koushin.