The Jakko (ジャッコー, Jakkō) is a helicopter/dragonfly-like Reaverbot. In Mega Man Legends, they are found underground in nests in the Cardon Forest Sub-Gate. Individually, the Jakko is weak but they become dangerous when in large numbers. The nest that the Jakko hides in has a high number of hitpoints and can seemingly provide an endless supply of Jakkos. Once the nest is destroyed, 8 to 12 Jakko will disperse from the nest's remains to continue attacking the nest's target.

In Mega Man Legends 2, if encountered on the surface on the icefield in Calinca and on Calbania Island, they will either jump out in a straight formation, fly forward and then burrow down or rise up and actually fight. They can also be seen flying around in the Manda Ruins after inserting the key card on the blue control panel. Mega Man Volnutt can hold Jakkos with the Lifter, and glides slowly instead of falling straight down after jumping. 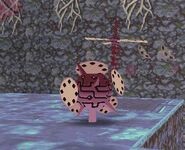 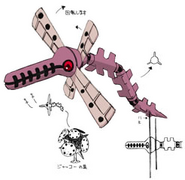 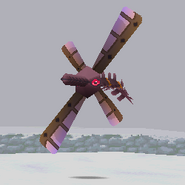 A gray Jakko in Mega Man Legends 2.
Add a photo to this gallery
Retrieved from "https://megaman.fandom.com/wiki/Jakko?oldid=246182"
Community content is available under CC-BY-SA unless otherwise noted.