Jamminger (ジャミンガー, Jamminger) is an enemy from the Mega Man X series that appears in Mega Man X, its remake Mega Man Maverick Hunter X, and in Mega Man Xtreme. It is an aerial robot used to prevent unauthorized entry in bases.

Jamminger tries to hit X with its spikes, laughing maliciously whenever it successfully does so. In Mega Man X they appear in the Opening Stage, Boomer Kuwanger's stage, Sting Chameleon's stage, Chill Penguin's stage and the first stage of the Sigma Palace. In Mega Man Maverick Hunter X they also appear in the second and third Sigma Palace stages.

Amount of shots/hits from Special Weapons it takes to destroy a Jamminger.

Jamminger has brief appearances in Worlds Unite, in the Rockman X manga, and in Irregular Hunter Rockman X. One also appears on the variant cover of Mega Man #40. 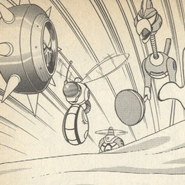 Retrieved from "https://megaman.fandom.com/wiki/Jamminger?oldid=311859"
Community content is available under CC-BY-SA unless otherwise noted.