Jazwares is a toy company based in Florida that released Mega Man action figures in the 2000s.

Mega Man Retro-Roto is a line of Mega Man PVC action figures released in 2005. The characters are designed like their original appearances in early games. Each of them has one of the five pieces necessary to assemble an action figure (the package incorrectly claims that six pieces exist). The action figure is a recolored Mega Man representing him with the Mega Buster fully charged. They were later re-released in 2010 without the parts for the fully charged Mega Man.

Second series:
The back of the package shows an image of Wood Man and Ice Man for a second wave planned to be released, but the line was canceled.[1]

Ultimate Armor Kit is a series of model kits.

Zero Version 2
Add a photo to this gallery 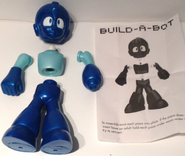 Cancelled figures.
Add a photo to this gallery 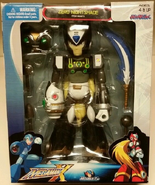 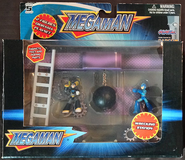 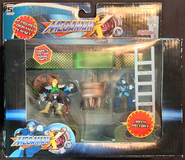 Retrieved from "https://megaman.fandom.com/wiki/Jazwares?oldid=317052"
Community content is available under CC-BY-SA unless otherwise noted.