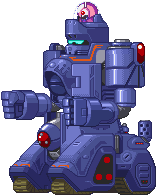 Jet King Robo (ジェットキングロボ, Jettokingurobo) is the fourth and final boss of the second King Castle stage from Mega Man & Bass. It is a fusion of King Tank, King Plane and King, fought almost immediately right after the latter. King uses this form after being defeated by Mega Man or Bass, and being brainwashed by Dr. Wily for refusing to fight.

It is gigantic and its only weak point is its head. Mega Man can use a platform to reach it, but Bass can either use a dashing double jump or angle his buster just right to strike it. His weakness is Wave Burner, but it can be difficult to use as Mega Man will need to jump from the platform when it is at its highest point and when King is very close to it. Bass will need to use the Treble Boost or a dashing double jump to gain the necessary height and then change to the Wave Burner from the subscreen.

If Jet King Robo is hit by an attack that would defeat it on the next hit, it will not gain invincibility frames, despite flashing as though it did, allowing the next shot to immediately destroy it. For example, if Jet King Robo has 10 HP left and is hit by the Wave Burner, the attack will deal 5 damage, then another 5 the next frame, defeating the boss with what seemed like one attack.

Displays the amount of damage in units that Jet King Robo will receive from each Special Weapon from Mega Man & Bass.