MMKB
Register
Don't have an account?
Sign In
in: Articles with hAudio microformats, Reploids, Mavericks,
and 10 more

"I'm impressed that you found me... But your search is over. Get ready X!"
―Jet Stingray, Mega Man X4

Jet Stingray, known as Jet Stingren (ジェット・スティングレン, Jet Stingren) in Japan, is a stingray-based Reploid and one of the Maverick bosses in Mega Man X4

Jet Stingray is a Reploid who worked his way up the ranks to become a member of the Reploid Navy of Repliforce. He was dedicated to his military career, and had great respect for both General and Colonel. When the Repliforce was labeled as Mavericks due to refusing to turn in their weapons after being suspected of involvement in the deadly Sky Lagoon disaster, General announced his move for Reploid independence and began a violent war to form a Reploid-only nation-state of Reploids and secede from humanity. The ultimate plan was for the nation of Reploids to be in a gigantic space colony known as the Final Weapon, where there would be a utopia and a sanctuary for all Reploids. Stingray's staunch loyalty to Repliforce made him support the coup d'etat.

To further this goal, Repliforce turned on the very humans that they had once protected. In order to distract the Maverick Hunters, Stingray sabotaged a city's underground power station and destroyed the city to cause mass panic and confusion as a distraction to draw them in.[1]. Then, Stingray and his forces escaped to a nearby Marine Base at the sea to evade the Hunters. After a long chase during which many of Stingray's soldiers were killed, the Hunters finally caught up with Stingray. The captain put up a fierce battle, but the Hunters' strength was too much and he was destroyed, his military career and life ending in disgrace in the very sea he had spent so long fighting.

Stingray poses excellent mobility as he can dash in either the water or air (Zero will learn this as the technique called Hienkyaku). He can also perform "crashing" attacks while dashing with extreme speed.

His weapon, Ground Hunter, is basically small robotic stingrays that run along the ground and up walls seeking out their target. There are two types of miniature stingrays that Stingray will release: blue that he will release from above in sets of four and red which he will start releasing when his health meter changes to yellow. These cause more damage and will also drop down once they are above the player rather than once they run into the far wall. He is incredibly fast and will try to charge into his opponent from any direction. Stingray will also use the jet turbine on his right arm to pull his opponent in.

Ice-based attacks will freeze him momentarily and interrupt his attacks. X can use a well timed Frost Tower to bring him down. With Zero, using Hyouretsuzan on Stingray takes practice. A popular strategy is to have both Hyouretsuzan and Kūenbu. Double jump when Stingray approaches, and then use Hyouretsuzan. One method that can reliably freeze Stingray is to stick to the wall behind him and use Hyouretsuzan once he descends to use his jet turbine, however this can only be used once he is below 50% of his health. If the player has Rakuhouha, it can be used to destroy the Ground Hunters in a tight situation as well as deal moderate damage. While Zero is performing the move he is also invincible, making Jet Stingray's diving attack less of a concern.

Most bosses show the ability that the player will gain during the battle. X's Ground Hunter is obviously the mini-stingrays Jet fires himself. Zero's air dash, or Hienkyaku, is of course based on Jet Stingray's mobility.

It is interesting to note that Jet Stingray's tail does not have a hitbox, either when he is stationary or diving.

Jet Stingray: I'm impressed that you found me... But your search is over. Get ready X!

Jet Stingray: Argh! He's still after me! Enough already. We settle this now!

Jet Stingray would be among the many Mavericks recreated and unleashed by Sigma-2 in order to invade various worlds through the Genesis Portals so that Sigma could use the Unity Engines to drain their energies and gain god-like power.

Jet Stingray appears in the manga version of Mega Man X4 as a loyal commander of the Repliforce navy. He has great respect and admiration for the Colonel, as he once saved his life during a mission by taking a blast meant for Stingray. He follows along with the Repliforce when they announce their coup d'etat against the human government. Just like in the game, he destroys an entire city on the Colonel's orders, using a remote-controlled device to trigger the explosion. However, he is shown having his Repliforce subordinates evacuate the human civilians from the city of Toraisu first.

Zero arrives on the scene with a Ride Chaser, demanding to know where the Colonel is, and Stingray refuses to tell him. He immediately recognizes Zero due to his red armor and blonde hair, as Colonel previously described Zero to Stingray in a conversation where he exclaimed that Zero was his lifelong rival. Stingray tells his subordinates to flee, saying he will handle Zero all on his own.

He is infuriated over the fact that Zero has chosen to oppose Colonel and the Repliforce, seeing it as a betrayal and insult to the Colonel. After Zero and Stingray battle it out for a while, Stingray's Repliforce subordinates intervene on the scene with Ride Chasers, wanting to aid their commander. Before they can, everyone present is blasted in a surprise attack from the Reploid Self-Defense Forces, who had come to stop Repliforce's coup. The Self-Defense Forces blast Zero because he had previously attacked fellow Maverick Hunters and declared his support for the Repliforce coup as part of his plan to go undercover and take down Repliforce but did not inform anyone of his plan. Thus, they were unaware that Zero was actually on their side. Stingray is clearly anguished over seeing his men wiped out, and he laments their deaths before succumbing to his own wounds from the blasts and perishing as well.

Zero would survive the battle, being rescued by Iris and taken to an undisclosed location where she provides medical treatment for Reploids injured from the ongoing Repliforce war. After waking up, Zero expresses outrage at Stingray for destroying the city of Toraisu. Zero argues that it didn't matter that he evacuated the millions of residents first as he cut off the financial lifeline for those same millions, making it the same as murder in his eyes. 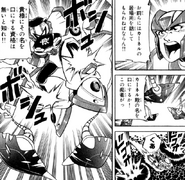 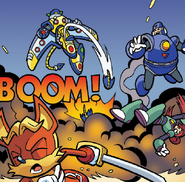