"Our deeds are dedicated to those robots who have been discarded like so many imperfect gemstones."
―Jewel Man, Mega Man Megamix

Jewel Man (ジュエルマン, Jueru Man) is a Robot Master from Mega Man 9 modeled after gems that Dr. Light created to work in a diamond mine where he was in charge of cutting and polishing rocks with dexterity. He likes to receive attention and collect shiny things.

Jewel Man is one of the eight Robot Masters whose period of use had expired and was scheduled to be scrapped. Dr. Wily pretended to be concerned by offering to repair them, reprogramming the tricked robots to help him conquer the world.

His pattern is running left and right with his Jewel Satellite surrounding him; he only jumps when Mega Man jumps, and throws individual jewels at Mega Man whenever he hits one of them or after a long time passes. With good aim, it's actually possible to slip in a shot through his shield; ironic since no projectiles can pass through the Jewel Satellite when used by Mega Man.

His weakness is Galaxy Man's Black Hole Bomb. In addition to doing five units of damage to him, it will also suck in the jewels of his Jewel Satellite, preventing him from firing at Mega Man until he creates more jewels.

In the end credits picture, he is seen in a mine holding up a jewel that he found and showing it to Roll, having been rebuilt after the events of the game.

Jewel Man's stage takes place in a cave like area with lots of crystals embedded into the ground.

Displays the amount of damage in units that Jewel Man will receive from each Special Weapon in Mega Man 9.

Jewel Man, or rather, a time-cloned version of him also appeared in Sonic the Hedgehog Issue 250 and Mega Man #27 of the Worlds Collide arc. The latter also ended up encountering a (humorous) confrontation with Rouge the Bat, the latter of whom was infatuated with his jewel-based body and attempted to pull off the large jewel on top of his head.

Jewel Man appears in the short Mega Man Megamix manga story "For Whose Sake?" included in the booklet of Rockman 9 Arrange Soundtrack and in Rockman Maniax.

Jewel Man in the ending credits of Mega Man 9. 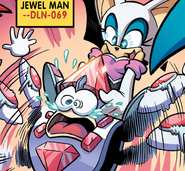 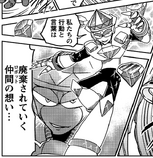 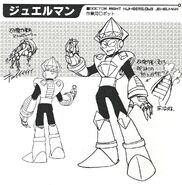 Jewwl Man from Rockman Maniax
Add a photo to this gallery

Retrieved from "https://megaman.fandom.com/wiki/Jewel_Man?oldid=355593"
Community content is available under CC-BY-SA unless otherwise noted.