Jupiter (ジュピター, Jupitā) is one of the second four Stardroids that Mega Man must fight in Mega Man V. He is a Robot Master equipped with a jet engine that allows him to fly at very fast speeds, which he likes to combine with acrobatics, but he often has a not so serious personality, to the annoyance of his allies. In ancient times, he was equipped with several megaton grade bombs, but feeling they were too dangerous for him indoors, he modified them to channel energy for his new main weapon, the Electric Shock, a huge beam of raw electricity. He dislikes turbulence while flying fast, and his weakness is the Bubble Bomb.

Jupiter's attack strategy is very simple and easy to avoid. He starts the battle by flying and hovering over Mega Man and, after a short time, he fires the Electric Shock, a large and powerful beam of electricity (being invincible while doing so) and then four small sparks that go diagonally in different directions each and deal minor damage. He then dives over Mega Man to make contact with him, and restart his strategy. Every one of his attacks can be avoided by just getting out of the way. He is most vulnerable to attack when he dives to attack Mega Man.

Jupiter's weakness is the Bubble Bomb, which can float up and explode on Jupiter even when he is flying high. However, he is still invincible to it when he is using the Electric Shock. It defeats Jupiter in seven hits.

Amount of damage in units that Jupiter will receive from each Special Weapon from Mega Man V.

Jupiter is revealed to be a creation of the diabolical Ra Moon, who after its defeat by Mega Man sends a signal to the Stardroids informing them of its demise.

In the manga Mega Man Gigamix, the Stardroids are powerful space robots that are attacking Earth, destroying several robots in the process, Jupiter defeating Wind Man. Jupiter and Venus later attack Dr. Light's Laboratory, fighting against the robots present in the local. At first they have advantage over Light's robots and Shadow Man, but for Jupiter's surprise, Duo appeared and destroyed Venus without effort, retreating.[1] He was eventually destroyed in space by a repaired and upgraded Mega Man.

Jupiter has a cameo appearance as one of the robots in the Robot Museum in the manga Rockman & Forte. 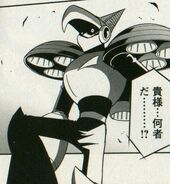 Retrieved from "https://megaman.fandom.com/wiki/Jupiter?oldid=336330"
Community content is available under CC-BY-SA unless otherwise noted.