Mega Man X8
Juuhazan (重波斬, Juuhazan lit. "Heavy Wave Slash") is the technique Zero and Layer obtain after defeating Gravity Antonion in Mega Man X8. Zero enters a charge stance, then performs a Gravity-element overhead slash. This technique doesn't have the ability to break enemy guard, but instead ignores enemy guard completely, allowing Zero to handle barrier-protected foes without having to break their guard. This is the same move as Gravity Antonion's attack of the same name, with the only difference being that Zero has to charge his saber before attacking, while Gravity Antonion can perform this move instantly.

This technique is Earthrock Trilobyte's primary weakness. Beside destroying his exoskeleton, it can also be used to break the Crystal Walls he creates.

Juuhazan changes when Zero equips the T Breaker or K Knuckle. Except for the range, it remains the same with D Glaive, B Fan and Σ Blade.

Dairettsui (大烈鎚, Dairettsui "Great Violent Hammer") is the version of Juuhazan with T Breaker equipped. Zero slams the ground with the T Breaker, unleashing an earthquake that can break enemies' defenses. Unlike Juuhazan, there is no charge stance before the attack is launched, and it occurs much more quickly.

Ganzanha (岩斬波, Ganzanha "Rock Slashing Wave") is the version of Juuhazan with K Knuckle equipped. Zero punches the ground, discharging a spark of energy that will break enemies' guards. Unlike Juuhazan, there is no charge stance and the attack is almost immediate. 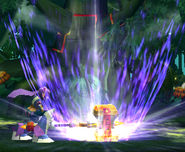 Counterparts to this Technique