"I wanna be a hero like you!"
—Kai, to Lan Hikari, Mega Man Battle Chip Challenge

Though unseen, Kai was one of the passengers on the same bus as Mayl Sakurai that Ms. Madd hijacked and rigged to explode before being stopped by Lan Hikari and MegaMan.EXE. After learning that Lan was in fact an older student at his school, Lan became Kai’s idol, referring to him as “Master Lan”.

One day after school, TurboMan tells Kai about the Battle Chip GP. Kai enters hoping to win the rare battle chip the winner gets and for a chance to battle Lan. When chosen as the player character, Kai battles through the tournament looking for Lan before being introduced to him by Yai Ayanokoji, learning that he was the one who defeated World Three and Gospel. Lan, trying to impress Kai, tells him that World Three agents had infiltrated the Battle Chip GP, and Kai wants to help. Now desperately trying to become a hero like Lan, Kai proclaims to Ribitta that he is on a secret mission and later runs into a shady person and chases him. He unwittingly runs into the ex-World Three agents and asks them if they had seen any World Three agents around before being taken away by Yai.

Kai and TurboMan appears in the Battle Story Rockman.EXE manga by Keijima Jun and Miho Asada, in Volume 4 as contestants in N1 Grand Prix. Although they have won the tournament, they are attacked by BeastMan and Takeo Inukai. Inukai uses dogs to interrupt Kai's operating, leaving TurboMan in a pinch. Lan and MegaMan soon come to their rescue to corner BeastMan, but having severe difficulty after DrillMan joins the fight and gangs up on them.

Impressed by Lan's courage, Kai stands his ground and asks TurboMan to do a counterattack: Reverse Turbo Wheel. This attacks gives MegaMan the perfect opportunity to unleash a strong battle chip attack, thus turning the tables. After GS appears and WWW executes their main plan, Kai and TurboMan are not shown again afterwards. But it is believed after this event, Kai and TurboMan idolizes Lan and MegaMan, just like they did in the game. 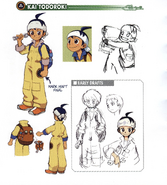 Concept art of Kai Todoroki.
Add a photo to this gallery

Retrieved from "https://megaman.fandom.com/wiki/Kai_Todoroki?oldid=317734"
Community content is available under CC-BY-SA unless otherwise noted.