Kamadoma (カマドーマー, Kamadōmā), known as Flea in some English sources, is a small jumping cricket robot from the Mega Man series that was once used to drive pests away from crops.

Kamadoma is found in the stages of Cut Man, Bomb Man and Elec Man and the first Wily stage.

Flea reappears in the remake from the first game. On Easy mode, they simply jump back and forth in a short, high arc. On other difficulty modes they act as normal.

A robot made to protect crops from pests. 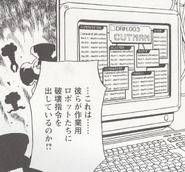 Kamadoma in the Rockman manga.

Kamadomas with a Tama in Mega Man Issue 41