Kattelox Island, known as Katoru Ox Island (カトルオックス島, Katoru Okkusu Shima, Katoru being possibly a katakana of Cattle) in Japan, is where 99% of Mega Man Legends takes place. The beginning of the game starts in an ancient tower in the middle of the ocean where Mega Man Volnutt must fight a one-armed Hanmuru Doll. After leaving the tower, MegaMan, Roll, Barrell and Data crash land on the island's Cardon Forest in their airship, the Flutter.

Kattelox Island was found around 100 years before the events of the game, and at the time of its discovery, the surface of the island was almost completely covered with ruined buildings. Kattelox became well known after the discovery of high-quality Refractors about 60 years ago. After the discovery of the presence of Refractors, it was also found that the island was riddled with underground ruins. Due to the various unfortunate accidents which plagued early exploration attempts and the persistence of the rumors of a legendary curse or disaster, the majority of these ruins were sealed off from the general public. Thus, digging is permitted in only a limited number of ruins. As for the legendary disaster, it is believed by some that every century, an undefined presence that resides beneath the island awakes and destroys all life present on it.

Research conducted by the current mayor, Amelia, shows that there are remnants of several different civilizations on Kattelox, which suggests that the previous inhabitants of the island have built a civilization many times, only to have it destroyed each time. This is believed to be the origin of the myth of the legendary disaster that haunts the island. While there is no scientific proof that Kattelox is destined for disaster, many people who believe in the legend choose to leave the island, and in fact the decreasing population has become one of the island's major concerns in recent years.

The walls and gates that divide the city into various areas are also remnants of ancient ruins, which continue to function even now. These walls, along with the ruins known as the Sub-Gates (located in Cardon Forest, Lake Jyun and Clozer Woods) and the Main Gate, are a monument to the technological achievements from the ancestors' society of the island. These ruins are filled with mysterious robots called Reaverbots.

In the events of the game, the island is attacked by the Bonnes, a family of air pirates that is seeking for a legendary treasure believed to be in the island's ruins, but Mega Man manages to protect the city from the Bonnes. By the mayor's request, Mega Man investigates the ruins to discover if the island is really faded to disaster every century as said in the legends. During his explorations, he finds MegaMan Juno "sleeping" deep within the Main Gate, a bureaucratic unit in charge of the ruins and installations of the island that purge Carbons (humans) on the island when they pass the pre-specified limit of the Urban Military Security Ordinance A10, reinitializing all of them with Eden if needed.

The island has a modern city in the center of an ancient wall left in ruins from an ancient civilization. This wall also divides the city into 5 districts - the City Hall in the north, the Uptown in the west, the Old City in the east, the Apple Market at the south and Downtown in the center. Amelia is the mayor of the city on Kattelox Island, and can issue licenses to enter the ruins on the island.

The Apple Market is a predominantly commercial area and is the only part of the city where outsiders can enter due to the fact that the other districts of the city require a citizen's ID card.

Downtown, known as Central Town in Japan, is a predominantly residencial district that also houses the city's library and one of the three Sub-Cities. Based on the outcome of one side-quest, the Servbots may open the restaurant Stripe Burger in the empty lot next to the Library.

The City Hall district serves as the island's administrative district housing the city hall itself, the police station, the bank and some condominiums.

The Uptown, known as Lakeside Park in Japan, serves mostly as a cultural center housing a few residencial houses, the KTOX TV station, the museum, a hospital, the YAG computer game school and Wily's boat house in Lake Jyun.

The Old City is mostly abandoned of human life but is filled with wild dogs. The buildings are mostly empty, except for a single power plant with a few workers. After the loss of the Gesellschaft, one warehouse is used by the Bonnes to build Theodore Bruno, which is used against Mega Man when he was looking for the Sub-City in the area. The Main Gate is located to the south of Old City.

Kattelox Island has also appeared in the game Marvel vs. Capcom 3: Fate of Two Worlds as a playable arena. The background has several Servbots and the Bonnes. Normally, Tron can be seen in the background holding a Servbot, but if the player plays as her then Teisel will cheer her on while she fights.

Bonne Wonderland, a winter version of Kattelox Island, appeared in Ultimate Marvel vs. Capcom 3 as a playable arena.

Kattelox Island's City Hall appears during Project X Zone's prologue and in the beginning of Chapter 3. Tron Bonne and Servbots #1, #17 and #28 are at City Hall working on the rocket to bring Mega Man Volnutt home before being suddenly teleported from the future to the Willamette Parkview Mall in the present, where she joins Frank West from Dead Rising and Hsien-ko from Darkstalkers to fight off both Gnosis and T-elos from the Xenosaga series. 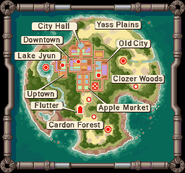 Map of the island in the Flutter.

Aerial view of the island.

Kattelox Island in Marvel vs. Capcom 3.

Kattelox Island's City Hall in Project X Zone
Add a photo to this gallery
Retrieved from "https://megaman.fandom.com/wiki/Kattelox_Island?oldid=293997"
Community content is available under CC-BY-SA unless otherwise noted.