Kelvin Stelar, known as Daigo Hoshikawa (星河大吾, Hoshikawa Daigo) in Japan, is a character from the Mega Man Star Force series. Kelvin, Geo Stelar's father, is an astronaut who went missing a few years before the first game. He was captured by the FM-ians while trying to form a BrotherBand with them, but Omega-Xis turned him and his crew into EM Waves so that they could survive in space. Unfortunately, they were lost.

When Andromeda goes out of control and almost eats Cepheus, Kelvin reminds Geo that everyone had counted on him, and that he must fight on, which gives him the strength to stand up and deal the finishing blow. Afterwards, Geo is forced to take the space stations escape pod back to Earth, but finds that he cannot properly navigate it, Kelvin appears in a dream, telling Geo to trust in his friends. This ends with Geo finding the BrotherBand link from his friends back on Earth, allowing him to follow it home. In the Deep Space Comp, Geo also finds Kelvin's Transer, along with the Kaiser Knuckle weapon and a message to Geo, explaining his fate.

He doesn't make an appearance, however he does encourage Geo to wake up after being rescued from Mu, ironically by Solo. Though, Solo states that Geo's unconscious body "just got in his way".

Kelvin is discovered to be inside Meteor G (as he had been converted to EM Waves by Omega-Xis). He discovered it as he was making his way back to Earth, saw how grave a threat it was and entered it to try and stop it. It was his interference that prevented Mr. King from harnessing Meteor G's full power and bought WAZA enough time to prepare their plans to destroy it. Hope Stelar gives Geo the "Kelvin Code" (Daigo Code) which plays a vital part in the final stage of the game as it helps locate Kelvin's memories throughout the Meteor Server, chronicling part of his travels through space and some of his time before leaving on his mission. At the end of the stage, Geo finds Kelvin standing in front of the core, only for him to be sucked in when the Crimson Dragon is summoned.

After the defeat of the Crimson Dragon, Kelvin calls out to the Hunter-VGs of those all over the Earth, telling them that Geo may not make it back and his sacrifice was not in vain. This inspires the people of Earth all to form a Purpose group to help guide Geo back to Earth. Kelvin tells Geo to use the resultant Purpose Wave, telling him that he and Omega-Xis will return when the time is right. As Geo unwillingly drifts back towards Earth, he finds a last piece of his father's memories left behind by Meteor G about the day of Geo's birth, and eventually hears the people of Earth calling for him. Without regret, Geo rides the Purpose Wave back to Earth.

Some time after his return, Geo is seen watching the sky, thanking Omega-Xis and Kelvin for their efforts. Then, a shooting star is seen headed towards Geo, and it turns out that Omega-Xis found a way back. A second shooting star is then seen headed towards them, which Geo and Omega-Xis stare at, talk a little, and walk home. Later at home, Geo returns to his mother, revealing that Omega-Xis and Kelvin have made it back to Earth safely (Omega-Xis comes in with Geo, but Kelvin surprises everyone by suddenly walking through the front door). The family re-unites, as the game shows a picture of Geo, Hope, Kelvin and Omega-Xis together. If Kelvin is still made of EM Waves is still unknown.

He appears after the final battle with Andromeda when Geo asks Cepheus to show him his father. Geo asks Kelvin to return home. Kelvin then tells Geo that the creation of the Andromeda Key had made the FM-ians a savage and belligerent species. But, he says that humans are no different from the FM-ians, for they hate, get angry with, and fight each other. He then says that the BrotherBand is their hope for the future. He continues on to say that by loving and trusting one another, even when it's someone hostile to you, their hearts can understand one another through the connection of the BrotherBand. He also believes that the BrotherBand will one day even make war disappear entirely from Earth. He then tells Geo that he wants to explore the vast universe and make connections with various lifeforms with the BrotherBand, so that it can act as a bridge between them and Earth. Kelvin then says that he leaves the Earth in Geo's hands, and also tells him to take care of his mother. He then leaves through space to go make his wish come true.

Kelvin's background is the same as the game. After the tournament at the Wave Coliseum is over, Gemini Spark steals the Star Force to revive Andromeda, the king of the FM-ians. This story arc concludes with Mega Man discovering that Andromeda and his father Kelvin had fused as a single EM Wave Human. Defeating Andromeda, Kelvin is freed and returns to Earth to live with his family and new FM-ian friends.

He spends the majority of the series as an EM Being as a result of Omega-Xis' intervention. As a result he is capable of surviving in space and can log into networks as any other EM body. Kelvin seems to be oddly powerful for a human turned EM Being as he was capable of both resisting and influencing Meteor G arguably for years despite the tremendous emission of Noise in the celestial body, and slow its decent towards Earth. He was also used by Crimson Dragon to power itself up suggesting many of its powers come from Kelvin itself rather than the core of Meteor G itself.

Concept art of Hope and Kelvin, 11 years ago. 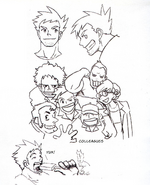 Concept art of Kelvin - sketch.
Add a photo to this gallery

Retrieved from "https://megaman.fandom.com/wiki/Kelvin_Stelar?oldid=292973"
Community content is available under CC-BY-SA unless otherwise noted.