Kerog (ケロッグ, Keroggu), also known as Croaker,[1] is a robotic frog found in Bubble Man's stage in Mega Man 2. It was originally part of an underwater robot carnival along with Claw. They spit out three Petit Kerogs. Even if there are multiple large Kerogs, as long as at least one Petit Kerog is on screen, they will not release any more. The Petit Kerogs are explosive in Super Adventure Rockman. In Mega Man: The Wily Wars, Kerogs are also found in Mega Water S's stage, as well as the second Wily Tower Stage.

Amount of shots/hits from Special Weapons it takes to destroy a Kerog.

Kerog appears briefly in the Rockman: Dr. Wily no Inbou manga, Mega Man #9 and also has a cameo appearance in Worlds Collide as one of the robots in the Skull Egg Zone.

Kerogs in the Mega Man comic. 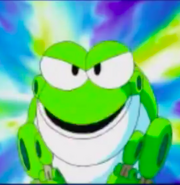