Killer Bomb (キラーボム, Kirā Bomu), known as Killer Bullet in some English sources, is an industrial flying bomb robot created to blow up distant objects. In the first Mega Man game, they appear as enemies in Bomb Man's stage, Fire Man's stage and in Dr. Wily's Robot Manufacturing Plant that explode on impact or when damaged.

A giant Killer Bomb has a cameo appearance in the stage Dr. Wily's Military Base from Marvel vs. Capcom.

An industrial robot created to blow up distant objects. You'll take damage if it detonates too close to you. 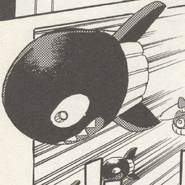 Killer Bomb in the Rockman manga.

Killer Bombs, with Pipis in Mega Man: Upon a Star

Killer Bombs with Fleas in the Rockman manga