Knight Man (ナイトマン, Naitoman) is a Robot Master from Mega Man 6 designed to resemble a medieval knight with resistant armor. He was created primarily for combat, with high attack and defense attributes at the cost of lower mobility due to his weight. It is said that Knight Man has defeated over 1000 robots in duels. Knight Man is one of the two Mega Man 6 Robot Masters to be designed specifically for combat (the other being Tomahawk Man), though not explicitly for the First Annual Robot Tournament. In the First Annual Robot Tournament, Knight Man was reprogrammed by Mr. X to help him conquer the world.

His Special Weapon, the Knight Crusher, is a strong flail with a long chain in his left arm which allows him to attack with huge power from great distances. In his right arm, he holds a resistant knight's shield, allowing him to block almost all attacks from the front.

Despite his tendency to be inflexible in having a single-track mind when it comes to any objective that he undertakes, Knight Man is a noble and valiant robot warrior who has a spirit of chivalry and honor while disliking those who perform and initiate dirty tricks in battle. Because of this, Yamato Man holds and maintains great respect for him, though ironically, the former's weakness is the Yamato Spear due to its ability to go around his shield and pierce his armor.

Knight Man is one of the eight bosses. He attacks by throwing his mace at exactly where Mega Man was when he started the attack: jumping at the opposite side it comes is the best way to avoid this. Also, the player has to try to determine where Knight Man will land after a jump, because he will attempt to land right on Mega Man. Sliding is the safest way to dodge his landing. He is only vulnerable when he attacks, as his shield deflects almost any attack. His weakness is the Yamato Spear, which also pierces through his shield and defeats him in seven hits. The Power Adaptor can also ignore his shield, but only if it is fully charged, and it deals decent damage to him, defeating Knight Man in fourteen hits.

In Rockman Strategy, Knight Man is one of the Robot Masters that assists Bass and Apollo. He is of the Fire attribute and is resistant to magma terrains. He can also be recruited to the player's team. 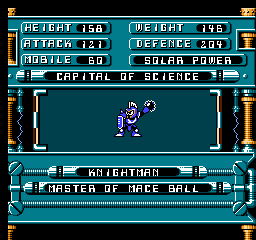 Mega Man Legacy Collection text: Designed with a medieval knight motif. His strong shield can block most attacks. Only the weapon that plays on his weakness can pierce it!

Knight Man's stage is a large castle with several gimmicks.

Amount of damage in units that Knight Man receives from each Special Weapon in Mega Man 6.

* For the Mega Buster, the first digit is the damage dealt by an uncharged shot, the second by a fully-charged shot.

Knight Man has a cameo appearance fighting Yamato Man in issue 20 of the Mega Man comic book series by Archie Comics. He later appeared in Sonic the Hedgehog Issue 250 alongside an army of other Robot Master engaging Mega Man, Sonic the Hedgehog, and their allies in battle. Most notably, he teamed up with Yamato Man to double-team Mega Man and Proto Man, and later fought Knuckles.

In the Mega Man Megamix manga series, Knight Man is a robot resembling a knight from medieval times created for combat from the very beginning, but he was slightly altered to fit within the guidelines of the Ultimate Robot Championship. During his design, his defenses were emphasized over his mobility, which resulted in his having armor thick external armor and a shield for added protection. To overcome the weight of his heavy armor, his power source has a high output level, and his Knight Crusher uses this extra energy output effectively. The spikes on his Knight Crusher help ensure that very little of an attack's force is lost at the moment of impact.

In the story "The Strongest Enemy to Date", Knight Man is one of the eight robots that Mr. X (Dr. Wily) took control with his evil chips. They are defeated by Mega Man, and after the main command center that was sending out signals to their chips is destroyed, Knight Man and the other robots were freed from Wily's control. When Dr. Light's robots search for Mega Man, Knight Man and the others are found by them and they talk about what happened. Later, Dr. Cossack repairs them and they help Mega Man clear his name, returning to their countries afterwards.

Knight Man also appears in briefly in the Mega Man Gigamix story "Moon of Darkness", where he is defeated by Neptune during the Stardroids attack around the world. He is later repaired and appears in one panel from the last story alongside the other robots from Mega Man 6.

In the Rockman 6 manga, Knight Man is a fair and chivalrous robot. He was the sixth robot defeated by Mega Man. In this manga, Centaur Man is actually a long-haired female robot that loves Knight Man. After Knight Man's defeat, Centaur Man wants to avenge him.

Knight Man has a cameo appearance in the Rockman & Forte manga as one of the robots in the robot museum.

He also appeared in the manga Rockman 4Koma Dai Koushin. In one of the strips, he rises his arms and his head is punctured by the spikes on his shoulders. 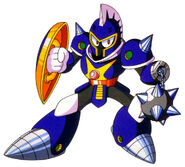 Front, side, and back view of Knight Man.

Knight Man in the comics. 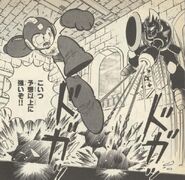 Knight Man in the manga Rockman 6. 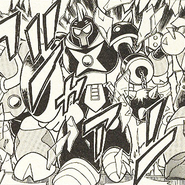