Kobun ga Tobun? (コブンが飛ぶん？, Kobun ga Tobun? "Kobun Flies?") is a game from the Rockman DASH series only released for mobile phones in Japan in 2001, being available from the Keitai Capcom services. In 2011 it was available on the d Market App Store as part of the Capcom Party Classics. In 2010 the game gained a new version with updated graphics.[1] The player controls a Kobun that has a propeller in the head and fly over cliffs. Shitapper and Data also appear as hidden playable characters.

Kobun ga Tobun? Xmas is a Christmas themed version of the game that was available from December 12 to December 25 in 2001.[2] It was also available on December 2002.[3] 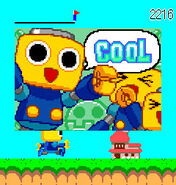 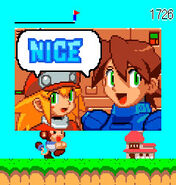 Xmas version screenshot
Add a photo to this gallery

Retrieved from "https://megaman.fandom.com/wiki/Kobun_ga_Tobun%3F?oldid=345851"
Community content is available under CC-BY-SA unless otherwise noted.