Kung Foo Kid, known as Goat Kungfu (ゴート・カンフー, Gōto Kanfū) in Japan, is the EM Wave Change of Kidd Gruff and Goat-Foo. He is an extra boss from Mega Man Star Force 2 that can be fought by first speaking to Kidd Gruff in Mess Village. He did not appear in the anime and manga.

Very little information is given about Kung Foo Kid, save for that he is a martial artist who is traveling through Mess Village at the time of the Mega Man Star Force series' second game. Like Kidd Gruff, Kung Foo Kid is a well-mannered and respecting fighter, and is always ready to challenge Mega Man to a sparring match.

At the beginning, the battlefield will have some Grass panels, in a checkered pattern starting from the middle panel of his back row, as seen in the table to the right.

He will continuously zip around the battlefield and then close in for one of the following attacks:

Runner-ups of that contest 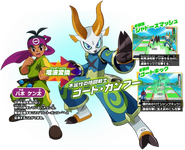