Kuruguru (クルグル, Kuruguru) is a Reaverbot encased in a hard shell that cannot be damaged by MegaMan's buster. Attacking one Kuruguru continuously will make it flip and fidget around on its back, making it unable to move and exposing its vulnerable underside. This Reaverbot is slow moving, but when it spots a target, it will charge in a short burst of speed to cause heavy damage. 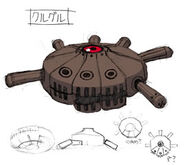 Concept art from Mega Man Legends.
Add a photo to this gallery

Retrieved from "https://megaman.fandom.com/wiki/Kuruguru?oldid=211703"
Community content is available under CC-BY-SA unless otherwise noted.