The Wind God of Pincer Attacks

In light of Elpizo's Operation Righteous Strike, Sage Harpuia sees this as reason for a counter-attack, and sends Kuwagust to commandeer an airship, armed with a bomb, on course for the Resistance Base. As he was built with the same technology as Herculious Anchus, they are known as brother Reploids, and he mentions him during his battle against Zero. If Zero defeats Kuwagust with Rank A or S, he will gain the EX Skill Sengatotsu.

When the player faces Kuwagust again in Yggdrasil, Zero fights both him and Herculious together, who both die once they are tricked into colliding into each other, resulting in their simultaneous demise after being brainwashed by Elpizo.

Kuwagust will use these attacks when fighting Zero: 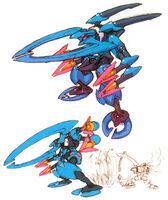 Kuwagust's concept art.
Add a photo to this gallery
Retrieved from "https://megaman.fandom.com/wiki/Kuwagust_Anchus?oldid=300359"
Community content is available under CC-BY-SA unless otherwise noted.