Ladder Yadder (ラダーヤダー, Radā Yadā) is a gecko-like Mechaniloid from the Mega Man X series that monitors forests to prevent poachers. Maverick Ladder Yadders appear in some ladders from Boomer Kuwanger's stage in Mega Man X. X must destroy Ladder Yadders in order to climb the ladder unscathed. In Mega Man Maverick Hunter X however, X can also climb ladders without destroying them by timing the climbs while they hide behind the ladders before they climb back to the front a few seconds later to avoid being hit by them. They are also in Spark Mandrill and Flame Mammoth's stages from Mega Man Maverick Hunter X. Oddly, they aren't found in Sting Chameleon's stage despite their original purpose being forest preservation. Their weakness is mainly Homing Torpedo.

Ladder Yadder also appeared as an unit card in TEPPEN. 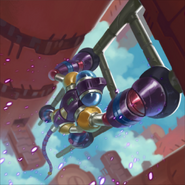 TEPPEN
Add a photo to this gallery

Retrieved from "https://megaman.fandom.com/wiki/Ladder_Yadder?oldid=308617"
Community content is available under CC-BY-SA unless otherwise noted.