Lan Hikari, known as Netto Hikari (光 熱斗, Hikari Netto) in Japan, is the main protagonist of the MegaMan NT Warrior anime series, a role he shares with his NetNavi MegaMan.EXE. A fifth grader at ACDC Elementary School, Lan is joined by his friends in his many adventures as he fights evil. He is the only son of Yuichiro and Haruka Hikari. When merged with MegaMan, Lan becomes C.F. MegaMan (C.F. Rockman (C.F. ロックマン, C.F. Rokkuman) in Japan).

Lan has few differences between himself and his video game counterpart, with the largest difference being his relationship with his NetNavi MegaMan; in the video games, MegaMan is in actuality his twin brother Hub, who had passed away at birth and given new life as MegaMan, while in the anime, MegaMan is a custom Navi gifted to him by his father for entering the fifth grade with no relation to Lan. Another large difference is Lan's ability to fuse with MegaMan with Cross Fusion, an element not present in the video games.

Lan is a young and headstrong boy, often letting his achievements and victories get to his head making him over confident, leading to his judgement being clouded. He is, however, a sharp and skilled netbattler, bringing unexpected victory against an opponent when they believe they have the upper hand. His impressive show of skill lead him to be recruited as a Net Savior, where he showed an equal talent in fighting with Cross Fusion. He has a short temper, and can easily annoyed by a situation that frustrates him, and often has a foul mouth during these situations.

As the series progresses, Lan matures and gains a level head, no longer rushing into situations over confidently or without thinking and working alongside his comrades to tackle situations, as well as asking and taking advice from others.

Lan is loyal and kind to not only his friends, but most others he meets during his journeys, even his enemies, leading to him making many friends and allies. He is the childhood friend of Maylu Sakurai, who shows romantic interest in him, though he is oblivious to it most of the time. Over time, he makes friends with rivals Chaud Blaze and Raika and the three make a team.

Lan is a glutton for food, and his favorite food is curry, is a regular customer at Number 1 Curry.

In the original Japanese version of the show, Lan is known to use foul lanaguage when frustrated, a trait he shares with his video game counterpart.

Lan debuts losing a net battle against local bully Dex Ogreon, with his NetNavi GutsMan fighting Lan's NormalNavi, which, though he shows great skill with, is unfit for battle. His father, Yuichiro Hikari, comes through on his promise to make Lan a custom NetNavi upon his entering the fifth grade, and gives him MegaMan. Despite Lan's initial reprehension of the blue Navi, thinking he was small and weak, MegaMan showed great prowess in stopping viruses causing an oven fire in Lan's house, defeating GutsMan, and then defeating Mr. Match’s NetNavi TorchMan when he set Maylu Sakurai's house on fire, and the two become fast friends. Jack-in! MegaMan!

Lan and MegaMan clashed with Match and the other World Three agents, Count Zap, Maddy, and Yahoot, during his adventures while aided by three mysterious NetAgents and many Traffic Signal Chaos! new Count to Three! friends Ice Ice Baby! along the way as well as meeting his then-rival Chaud Blaze, of whom he and his NetNavi ProtoMan were initially unimpressed with the two's skills. The Yoga Warrior! The two then participate in the N1 Grand Prix, where they learn of and practice the legendary Program Advance Street Fight! and overcome many opponents, including the World Three and their Solo NetNavis StoneMan and BlasterMan, before facing off against Chaud and ProtoMan in the finals. MegaMan and ProtoMan engage in an epic fight, and even when the arena begins to sink into the sea due to a structural failure, Lan and Chaud saw the fight through to the end, where ProtoMan is the victor. Despite having won the respect of their rivals, MegaMan is deleted when the awakened PharaohMan attacks the two Navis and MegaMan takes the blow for ProtoMan, shocking everyone present and crushing Lan's spirit. That Sinking Feeling! Though hope seemed lost, MegaMan's emblem appears on the screens of the PETs of Lan's friends, and they come together to help revive MegaMan, who then defeats PharaohMan. MegaMan Lives!

As prize for winning second place in the N1, Lan and MegaMan take a trip around the world where they travel to Jyawaii, where them and their friends encounter a ghost ship Bizarre! Mystery of the Ghost Ship! and meet cyber idol Aki To Become An Idol!, Netopia, where Lan forges a strong friendship with Raoul and helps him and the local residents of Heaven City stop the corrupt Mayor Daryl from destroying their homes MegaMan Stolen! and where he takes on Ms. Million's Survival Seven game in Brand City with the help of Chaud SnakeMan's Survival Seven, Kingland, where Lan battles Count Zap once more Don't Mess with Mama Zap!, and finally Namaste, where Lan indulges on curry from several locations before taking on the World Three agents once more before returning home. The Great Curry Battle

The duo are then introduced to the NetCity NetCity! where the learn about Grave while destroying their virus factory underneath the city. The Virus Factory Lan and MegaMan then clash with Grave and their operatives while learning about Style Change and meet Princess Pride of Brightland, of whom Lan becomes close friends with. Guess Who's Coming to NetBattle! Lan also befriends Tora Chess Mess! and Kyuta Hoshida Take Me Out to the Ball Game! and helps Pride save KnightMan from the treachery of MoltanicMan and prevents the World Three from being revived Mr. Wily's Legacy! before his and MegaMan's final clash with Grave, FreezeMan, and their Grave Virus Beast. With the aid of his friends and allies, Match's new Navi HeatMan, and the mysterious Navi Bass, Grave is defeated once and for all. The VirusBeast! Grave (episode) Bass (episode) The End of the End! Lan then meets Dex's younger brother Chisao and helps his father qualm a new experiment involving bringing the cyber world materialize in the real world, defeating the Life Virus causing all the problems. Virus Busting

Early on in the series, Lan shows great potential in Net Battling after stopping the Darkloid FlashMan.EXE, and is recruited as a Net Savior. As the series progresses he meets many other Net Saviors, such as Gorou Misaki and PrismMan.EXE, Raika and SearchMan.EXE, and even Chaud Blaze and ProtoMan.

This film takes place between episodes 22 and 29 of Stream. Episodes 29 and beyond are summarized after this section.

Lan, despite being human, gains abilities when cross fused with MegaMan, obtaining roughly the same powers as him, though due to cross fusion straining Lan already, he cannot hold these forms nearly as long or as well as MegaMan.

Performed with MegaMan. Lan forms an “armor” of MegaMan on himself, allowing him to fight enemies in the real world with the assistance of a Dimensional Area.

Lan utilizes Double Soul when going up against C.F. LaserMan in the season finale of Axess. Because Cross Fusion already uses up much of Lan's strength, adding Double Soul onto it drained Lan of his energy quickly. Despite loading Proto Soul into his PET with the others, he never uses it.

C.F. MegaMan uses Metal Soul to enhance his strength and durability, allowing him to defend against being crushed by C.F. LaserMan's fist.

C.F. MegaMan uses Thunder Soul's Elec Beam to break the ground underneath C.F. LaserMan, causing him to lose his footing.

In an effort to finish off Regal, Lan uses Search Soul's Scope Gun, barely having enough energy to aim. He manages to lock on and fire, but this does not phase C.F. LaserMan.

When Beyondard Dr. Wily begins to pour the Beast Factor into RockMan after the former absorbed Trill's data to gain the power of the Synchronizer in an effort to eradicate it, Netto cross fuses with Rockman in an attempt to save his friend. The result of this was "Beast Form Cross Fusion Rockman" (獣化クロスフュージョンロックマン, Juuka Kurosu Fyūjon Rokkuman), which combined the powers of Glaga and Falzer into C.F. Rockman and making him immensely powerful, allowing him to easily crush the Super Cyber Beast.

The anime versions of Netto and Rockman are the main characters of Rockman.EXE WS, a video game for the Wonderswan Color that loosely adapts the events of the first season of the show.

Lan in the first season of the anime. 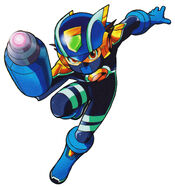 Retrieved from "https://megaman.fandom.com/wiki/Lan_Hikari_(anime)?oldid=351747"
Community content is available under CC-BY-SA unless otherwise noted.