Laplace (ラプラス, Rapurasu) is the Wizard partner of Solo in Mega Man Star Force 3. According to the game Laplace is the last EM Being from Le Mu, awakened after the continent Mu fell in to the ocean. He is unregistered under Project TC, while Solo is registered as No. 002.

Because Solo can already EM Wave Change by himself, he doesn't perform Wave Change with Laplace; instead, Laplace transforms into his sword, which he can use in human form and as Rogue. This replaces his sword from the previous version, which he pulled from his left arm.

Very little is revealed about Laplace, other than his origins as the last EM Being from Mu. When Geo Stelar and his friends first see Solo in the third game, Laplace is already his partner. This lasts throughout the game, where Laplace is inseparable from Solo/Rogue, and where he is always pulled out at the beginning of a battle.

Just before Mega Man enters the Black Hole Server, he is challenged by Rogue to a fight to decide who will battle Sirius. Mega Man points out that while Solo rejects all bonds with humans, he feels a deep connection to his own culture and Laplace along with it. This is why Solo has formed such a close partnership despite his normal attitude towards companions, and proves that he sees Laplace as much more than just a tool and that Laplace shares Solo's pain. 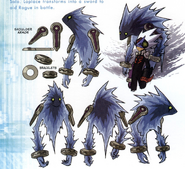 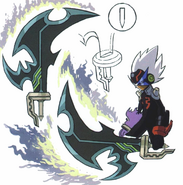 Laplace is possibly named after the mathematical transformation of the same name, Pierre-Simon Laplace, and arguably Laplace's demon.