Launch Octopus, known in Japan as Launcher Octopuld (ランチャー・オクトパルド, Ranchā Okutoparudo), is an octopus-type Maverick in Mega Man X. He was a Maverick Hunter from the 6th Marine Unit under Sigma who followed his revolt. In Mega Man X5, he was revealed to be a friend and/or brother to Squid Adler, depending on the translation; his name was also mistranslated as "Octopardo". He appears in Mega Man Maverick Hunter X in the same role as before, with a slightly effeminate personality.

X: Sigma Must Have Brought His Body Back To Life!!

Launch Octopus: I Have Been Ordered To Fight.

In the Carddas, Mega Mission 3, Launch Octopus is revived as "Launcher Octopuld HL", and disguises himself as a recruit Maverick Hunter named "Blau Launcher" to attack the Maverick Hunter base with three other Mavericks. Some of Launch Octopus' changes include his color scheme changed to blue and black, the top of his head is now a transparent red, and he uses a trident. 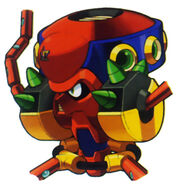 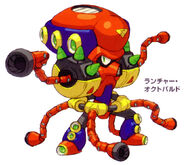 Retrieved from "https://megaman.fandom.com/wiki/Launch_Octopus?oldid=199994"
Community content is available under CC-BY-SA unless otherwise noted.