Layer (レイヤー, Reiyā) is one of three Navigator Reploids in the game Mega Man X8. A new member of the Maverick Hunters, she is Zero's Navigator and playable counterpart.

Compared to her fellow operators, Layer appears to be the oldest. She appears as a dark-skinned female Reploid with a beauty mark on the left side of her face, and long violet hair set in a traditional Japanese princess hairstyle, which covers her green eyes except when flustered. Her armor design features a white and blue color scheme with light purple accents, as well as yellow jewels; her arms have a bell-sleeve design. She wears a red transceiver headset with a bit of a receiver-like design. Her upper arms, midriff and bottom part of her breasts, and parts of her thighs are covered in a clear body suit, while her chest is mostly covered by a white armored plate. Combined with her weapon of choice, Layer gives off a refined and professional air.

In Rockman X DiVE's 2020 summer event, a variant of her called Swimsuit Layer was featured. Swimsuit Layer wears a blue and white bikini with high heels, and her hair is set in a ponytail.

Layer is a reserved and intelligent individual. She is trained as a Navigator specializing in Reploid and Mechaniloid development. Her high processing power allows her to quickly analyze scan data sent back by Hunters in the field and determine a target's strengths and weaknesses. She is normally cool and collected, but seems to get a little flustered when working with Zero. Around him, she shows more concern, even blushing when talking with him at times. Pallette's comment on how she "waited the whole time for Zero" suggests Layer has a crush on him.

Layer, being a newly-assigned Navigator, first appears shortly after the New Generation Reploids begin rioting. She introduces herself as a specialist in enemy analysis, and can then be chosen to assist X, Zero, and Axl with info in the field.

After the Maverick Hunters defeat two Mavericks, Layer and Pallette more casually introduce themselves to Zero. Pallette teases Layer about her crush on Zero, and Layer awkwardly tries to speak with him about the mission. After defeating six Mavericks, she asks X about Zero's emotional status, and he tells her of Zero's history with the Maverick Virus.

When the Hunters defeat Vile at the top of the Jakob Orbital Elevator, Layer and Zero discuss his past. He asks Layer to continue being his Navigator so he can finish the crisis, which Layer quietly appreciates. However, once the Hunters enter Sigma's palace on the Moon, communications are blocked so Layer and the other Navigators can no longer support them.

Layer can also be unlocked as a playable character. She takes after Zero, utilizing the Layer Rapier and the same extra weapons and techniques that Zero can. However, she has no pre-boss battle dialogue with Mavericks. She is unlocked by either completing the game once while using Layer at least two times more than the other Navigators, or entering a secret code at the title screen (a Layer sound clip can be heard when entering the code correctly). She will then need to be purchased at the R&D lab for 40,000 Metals (or 36,000 if Metal Discount has been acquired).

Layer is an A rank Hunter Program that has Renyoudan and Tenshouha as her skills.

Layer has a S rank event variant named Swimsuit Layer. This version of her has F-Splasher and Water Melon Slice as skills, and has two alternate colors available as skins.

Layer: Good work out there, X. Um.. Zero looks awfully down in the dumps...

X: Oh? Are you worried about him, Layer?

Layer: No... Um... Not really... As an operator, I'm just concerned about the overall welfare of the team. That's all...

X: Zero's been used before by Sigma to create a virus. He's upset that his data was used in an attempt to destroy the world...

X: He shouldn't blame himself. The problem's already been solved anyway. It seems Sigma may be involved in this new threat as well. Zero wants to take care of him for good this time. So do I.

Layer: Zero... Does it remind you of the virus?

Zero: So, you heard about that? He tried to use me to destroy the world.

Zero: That's why I've got to find him and turn him into a pile of molten scrap! Be my navigator. Help me find that Maverick before he fulfills his plan!

Hunter Base (after defeating 2 Mavericks)

Hunter Base (after defeating 3 Mavericks)

Hunter Base (after defeating 7 Mavericks)

"Zero/X/Axl can you hear me?" (First ping during mission.)

"Here's what my analysis shows." (If first ping is ignored.)

"This is Layer." (If first ping is ignored.)

"Everyone, can you hear me?" (If first ping is ignored.) 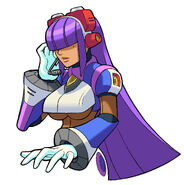 Layer as a playable character in Mega Man X8. 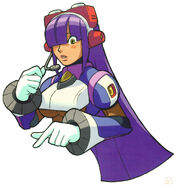 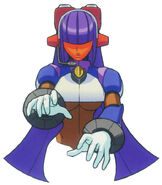 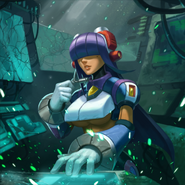 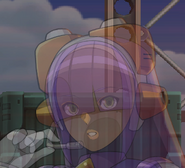 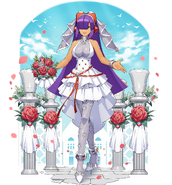