Le Mu (ラ・ムー, Ra Mū) is the final boss in Mega Man Star Force 2. In the legends of Mu, he is said to be the god of EM Waves, in addition to being the ruler of the continent of Mu. After the Mu people's destruction, Le Mu fell into a deep slumber, until reawakened by Lady Vega with the power of the OOPArt(s).

In the Alternate Future, Le Mu had given life to a successor EM Being, known as Apollo Flame.

Le Mu first appears in the throne room of the Great Shrine area on the floating continent of Mu. Lady Vega reveals to Hyde that Le Mu is the "god of EM waves". Once awakened, Le Mu begins creating copies of the Mu UMAs and Murians and sends the UMAs towards Earth, invading the entire world. Mega Man proceeds towards Mu, and is warned by a Hertz that the legends say the god of EM waves resides there, but Mega dismisses it as a legend.

Later, Mega Man reaches the Great Shrine, and Vega calls him into the throne room. She tells him of Le Mu, and that he is a god, but Geo and Omega-Xis don't believe her. She also tells them of her past, and of her plan to become a god to rule over the people of Earth in order to fix society by dividing it between the talented and the foolish. She says Le Mu is responsible for making Mu an advanced civilization, lifting the continent, creating endless supplies of Mu EM bodies out of nothing, and creating the EM Wave World itself. Mega Man refuses an offer to join Vega, and engages in a final confrontation with Le Mu. Mega Man wins, but in a last and suicidal attempt, Vega orders a heavily-damaged Le Mu to smash Mu into the ground to blow the Earth up.

Mega Man tries to stop her, but Hollow ends his battle with Rogue and appears to assist her. Mega Man damages Hollow, and discovers he is a Matter Wave shaped like a human. Vega tells Mega Man of her dead lover, Altair, and of Hollow's past. Le Mu then becomes out of Vega's control and starts exploding from all of his injuries, and a powerful explosion throws everyone a small distance from the Shrine Room. Hollow shields Vega with his body, and is killed in the process. His last prayer travels beyond dimensions, and a miracle temporarily brings back Altair's voice to speak with Vega.

Just as Mega Man speaks with Vega, Le Mu reawakens, and continues to carry out Vega's last order. Vega leaves, and Mega Man heads back to finish what has been started. He shoots twice, but Le Mu is unaffected. Mega Man falls, but his friends call his Star Carrier and tell him that the whole world is listening to his bravery. Encouraged, Mega Man stands up and destroys Le Mu with one final shot from his Mega Buster, causing the entire continent of Mu to collapse into the ocean.

During the extra storyline involving the Alternate Future and Apollo Flame, Mega Man gathers the five seals of which Apollo spoke, and returns to face a more powerful Le Mu, known as Le Mu Xa, known as Le Mu Χα (カオス, "Chaos") in Japan. [2] There is no story explanation to this, being only an extra game challenge.

Once Mega Man defeats Le Mu Xa, a different ending occurs. Rogue rescues Mega Man from the collapsing continent of Mu, but brings him to the deepest part of the Whazzap Ruins. There, he challenges Mega Man as Rogue SX to a final showdown between his acceptance of loneliness and Mega Man's Link Power.

Le Mu has only a brief appearance, and is seen attempting to crawl through the portal connecting Mu and Earth near the end of the series. Burai appears at the portal's exit to hold Le Mu back. He commands Rockman, in Tribe King form, to use the power of the OOPArts to seal the portal to prevent Le Mu from destroying Earth. Rockman does so using Kaiser Delta Breaker, destroying the portal and sealing Le Mu and Rogue with the continent for good.

As the final boss, Le Mu doesn't drop Battle Cards, but a Giga Card of him could be obtained for a limited time in events. 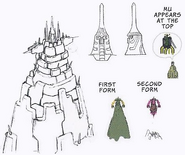 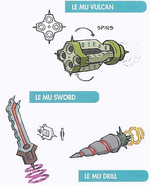