Leaf Shield (リーフシールド, Rīfu Shīrudo) is Wood Man's power. It can be obtained after defeating Wood Man in Mega Man 2, Mega Man II, Mega Man: The Power Battle, and Super Adventure Rockman, and is one of the abilities that Mega Man can use in the Marvel vs. Capcom games. When used, the shield will stay on Mega Man as long as he stays still, but the instant he moves, the shield will fly off in the direction he moved in. Wood Man can be seen using the power in the Sega Saturn version of Mega Man 8, and it also appears in Mega Man 10 as an ability of the Weapons Archive.

The Leaf Shield is quite useful when used on the moving platforms in Crash Man's stage, as the Telly's will be destroyed upon making impact with the Leaf Shield; the same strategy is highly advised when dealing with Pipis in Air Man's stage and use of such a strategy may result in the getting of many powerups. 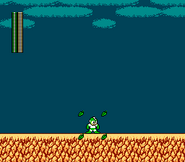 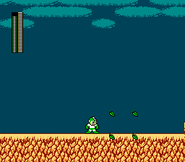 Mega Man firing Leaf Shield in front of him.
Add a photo to this gallery

Mega Man getting Leaf Shield in the cartoon show.
Add a photo to this gallery

Retrieved from "https://megaman.fandom.com/wiki/Leaf_Shield?oldid=128645"
Community content is available under CC-BY-SA unless otherwise noted.