True to his fabulous motif frequently seen in the series, besides the usual gray jean and yellow shirt, he also wears a translucent cape jacket with a red tie and a golden belt that reads "LEGEND". He also has a Visualizer with a portable radar attached that lets him see EM waves and detect them from a far distance.

In both the first and second Mega Man Star Force games, Legendary Master Shin recognizes players' Best Combos, and can turn them into one-time-use Battle Cards for a fee. In the second game, he is also the moderator of the Sky Hi Colosseum, and keeps track of the player's progress within it. He is capable of redeeming "Cipher" codes players find throughout the first and second game of the series, yielding chips, abilities, or different items for the player to use. Interestingly, in the first two games, Shin seems knowledgeable about MegaMan's actions and the battles going on. His role by the third game has been dramatically reduced; he is no longer capable of supporting the player and only appears once during a cutscene on the television where it is revealed that he is an EM Wave fanatic and scientist.

In the first and second games, the player could obtain a BrotherBand with Legendary Master Shin by using a wireless station during events, but now the only possible way is to use a cheat engine. 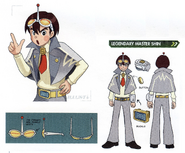 Concept art of Legendary Master Shin.
Add a photo to this gallery

Retrieved from "https://megaman.fandom.com/wiki/Legendary_Master_Shin?oldid=313972"
Community content is available under CC-BY-SA unless otherwise noted.