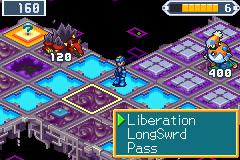 Liberation Mission, known as Liberate Mission (リベレートミッション, Riberēto Misshon) in Japan, is a turn-based game mechanic exclusive to Mega Man Battle Network 5's versions and its re-release. When Nebula conquers the Cyberworld during the opening scenes of the game, it's up to a team of NetNavis operated by Lan Hikari to liberate the areas occupied by Nebula. Defeating the Darkloid put in charge will free the area from its Dark Power. The player can use the L button to view the mission area, R button to switch between the characters, and Start button to retreat and restart the mission. The Folder cannot be changed and/or edited during the mission, so the operator must prepare accordingly.

Each turn between the opposing sides is considered a "phase". The player takes his phase to operate each of his Navis, and once every Navi has taken or passed his or her turn, it passes on to the Darkloid's phase. During this, the Darkloid will heal up to 50% of his max HP and attack any nearby Navi, and after which any guardians (special enemy units with their own field attacks) available will move and/or attack if they can.

Liberation (リベレート, Riberēto, Liberate) is the action of liberating panels. The player must defeat the viruses on the panel in three turns (a turn is equivalent to the Custom Gauge filling up - once it does it will automatically open without needing the player's input), or the liberation will fail. Defeating them in one turn will also liberate all Dark Panels surrounding the Navi. The more Dark Panels surrounding the Navi in his position before the fight, the harder the battle will be. If the player is surrounded in battle, he can use the L/R buttons to turn around. Some characters have special Liberation Abilities that allows to free more than one panel by the cost of Order Points, seen in the gauge in the top right of the screen. MegaMan for instance has the command "Long Sword", which allows to liberate two panels in front of him.

If any participating Navi reaches 0 HP, the game is not over; instead they are paralyzed for 2 phases, before they recover at 50% max HP. However, if all participating Navis reach this state, the game will be over. If a Navi passes their turn, they can also opt to recover 50% of their max HP unless they have been paralyzed by an attack or trap.

The Navis taking part in the Liberation missions each have their own special abilities, which usually cost Order Points to use. Liberation Abilities that involve entering a battle will always have their full effect regardless of how much time was taken.

Depending on the layout of the Dark Panels surrounding the Navi, the Liberation battles may initiate with more or less area granted to the player. Dark Holes are also accounted when deciding the terrain during Liberation battles.

In Double Team DS, if two or three Navis are standing on the same panel and have not battled yet, they can all enter the battle at once when a battle is initiated, using these Navis and the Party Battle System. If this is done, after the battle the Navis will have taken their turn and cannot take further action for the rest of the phase. Also, the player can edit his folder any time during the Mission, and can save once per phase regardless of which Navi is under control, instead of having to use ProtoMan, Colonel, Meddy, or ToadMan to save. X and Y is now used to switch between Navis, and L and R will allow the player to view the mission area. Pressing Start opens the menu, and retreating is done by touching the Retreat button on the touch screen.

The DS remake also adds Transport Chips, known as Transporter Chips (トランスポーターチップ, Toransupōtā Chippu) in Japan, TP Chips (ＴＰチップ) for short, allowing the player to switch a Navi on their team with a Navi of a similar role from the opposing version. (e.g. KnightMan and MagnetMan) Performing this action will consume the Transport Chip for the Mission. Reverting to the original Navi has no cost, but switching them another time will consume another Transport Chip. A maximum of 3 Navis from the opposing version may be present at any one time, and swapping an injured Navi will not restore any HP. The player can find up to 4 Transport Chips per game version (and thus perform up to 4 swaps during a single mission), but most can only be obtained once the player has completed the main plot on both versions.

The Darkloids within each Liberation Mission possess special out-of-battle attacks that they can use to harass the player's team on the field. They attack whenever any character falls within range, otherwise they will remain motionless and regenerate HP if possible.