Libra Scales, known as Libra Balance (リブラ・バランス, Ribura Baransu) in Japan, is the EM Wave Change between Geo's teacher Mitch Shepar and the FM-ian Libra. Libra was the one who combined with Mr. Shepar because he couldn't make up his mind about whether to keep to his ideals of fun learning and get fired or stop his ideals for the sake of his children.

Libra Scales is the result of Mitch and Libra merging after Mitch's mental break down due to stress. Libra convinces Mitch that he must abandon his ideals in order to succeed and he activates the Study Wave (an EM wave that stimulates brain activity), forcing his students to study nonstop. After Geo (as Mega Man) encountered Libra Scales in the Study Wave Comp, they battle and Libra Scales lost, Libra being destroyed.

Libra was later resurrected by Cepheus, who took the form of Libra Scales via memory data. However, he is defeated again.

Although Libra is absent, he appears as a Noise Change with no element.

After Libra failed to recreate the designs of bottle rockets (which Shepar was planning to use in his science class), he gives up, transforms to Libra Scales and attacks the labs. During his attacks, he causes fires atop some tanks, which threaten to cause an explosion should the pressure get too high. Mega Man eventually stops him, injuring him critically and forcing him to retreat again.

Later, Libra can take on the form of Libra Scales without Mitch Shepar with the wavelength device that Cygnus stole. He takes this form to fight Mega Man and to stop his fellow FM-ians from destroying his TV show. When Libra develops a split personality later in the series, he splits into a "Fire half" and an "Aqua half", both of which represent his aggressive or passive choices respectively. The Fire half decides to resume the attack on Earth, transforming into Libra Scales to do so. Eventually, when the Fire half accidentally sets off a fire that traps himself, the Aqua half arrives, and both resolve to work together and put out the fire.

Libra takes this form in the last battle against Mega Man, but retreats with the other FM-ians when he is ordered to by Cepheus. He is later slain by Gemini Spark to fill the Andromeda Key.

In the first Mega Man Star Force game, Libra Scales has the following attacks and abilities: 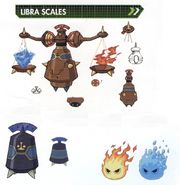 Concept art of Libra Scales.
Add a photo to this gallery

Retrieved from "https://megaman.fandom.com/wiki/Libra_Scales?oldid=293056"
Community content is available under CC-BY-SA unless otherwise noted.