MMKB
Register
Don't have an account?
Sign In
Advertisement
in: Articles with hAudio microformats, Articles in need of expansion, Mega Man Battle Network bosses,
and 8 more

The Life Virus serves as the final boss. It was created by Wily, who used the four elemental programs to create it. Wily was going to put the virus into a rocket and have it destroy the planet by infecting and destroying the Cyberworld. Lan and MegaMan intervened at the last moment and deleted the virus. It lives on however, in the form of the Life Aura Battle Chip.

The game begins with a scene of MegaMan defeating the virus. He is repeatedly mentioned throughout the game as being revived, and is fought at the end of the game as the improved Life Virus R. He is created by an assistant of Wily, the Professor, and can create duplicates of Navi's fought throughout the game.

When beaten, his core exposes itself, flying around dropping data balls which can decrease MegaMan's health bar down to only 1 HP. However, contact with the virus itself will cause 300 HP damage.

Once defeated, the Life Virus is destroyed, and although the Professor threatens to revive a new one, he is found and arrested, thanks to Zero.

The Life Virus appears as the secret boss of World 4, unlocked after defeating SharkMan.EXE, HeatMan.EXE, WoodMan.EXE, and ThunderMan.EXE at least once each.

Dream Virus appears as the last boss of the game. When it is destroyed for the second time it gives Rockman the Saito Style.

In the anime, the Life Virus is not a single creation, but rather a rare and powerful virus that can be found.

In the anime, a Life Virus showed up in the last ten minutes of the final episode of the first season. It was inside the experimental Dimensional Area Dr. Hikari had created where Lan and co. attempted to delete it using water. They failed, however, and just as it was about to crush them, MegaMan and the other Navis arrived and attacked it using water chips. MegaMan finished it off with the Aqua Custom style and deletes it for good.

An exact copy of it appeared as the final boss of a video game that Roll plays to attract the attention of a Navi kidnapper that kidnaps strong Navis. She fails, but Chaud secretly helps her and uses a Black Hole chip that absorbs the virus. It has the exact appearance of the Life Virus, but is most likely completely different.

An army of Dream Viruses appeared in two episodes of Beast lead by Zoano GutsMan for Glaga's army in an attempt to capture Trill. They also fought off Falzer's RoiHawk army that was lead by Zoano SnakeMan. Trill's Secret Synchronizer (episode)

The Life Virus appears in the chapter "Battleground Silver Tower", of the manga series when Dr. Wily stole the ultimate program and upgraded the Life Virus with it. MegaMan and the whole Anti World Three Team arrived to battle the Life Virus. They hit it with their best shots, but it was useless against the Life Aura. Not only did the Life Virus have a great defense, but also a powerful offense, as it took out all the members of the Anti World Three Team in one hit with Meteor, except MegaMan and ProtoMan, leaving them to battle it. However, it turned out that the ultimate program and life aura were incomplete; only a major hit was needed to take it down. Dr. Hikari explained, that the only way to defeat the Life Virus was to get past the life aura, as it only takes a millisecond for the aura to reset. ProtoMan attacked with Knight Sword to take out the life aura, allowing MegaMan to get through in full Synchro Mode to destroy the Life Virus by sacrificing himself.

In volume 1, Wily shows off his Aura virus, Proto Life Virus 03, against MegaMan and ProtoMan. It was eventually defeated by their teamwork's Double Hero attack. Afterwards, over time, Wily creates the Life Power for the WWW Navis, an ability to transform them into Bit Life Virus.

After the defeat of Ultimate Navi Gospel in volume 3, Wily shows that by combining the the Bit Life Viruses, he can create the completed Life Virus. Upon forming, Lan and gang's PET instantaneously explodes. Wily explains his goal is to spread the virus via e-mail and destroy every users' PET in the world. In a nick of time, Chaud arrives to give the Plug-in PET, giving Lan a second chance to fight. Wily then creates more Bit Life Viruses and attaches them to the Life Virus using the Super Program Creation Data, elaborating he can create more Ultimate Bodies if he wishes. Through perseverance and a teamwork synchronization, Lan and MegaMan destroys the Life Virus.

If MegaMan makes direct contact with the core, it will deal 300 damage to him. 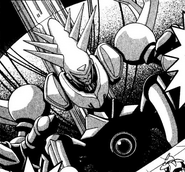 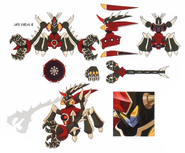