The Light Capsule (ライトカプセル, Raito Kapuseru, Right Capsule in Japan),[1] also known as Parts Capsule (パーツカプセル, Parts Capsule),[2] Power Up Capsule (パワーアップカプセル, Power Up Capsule)[3] and Armor Capsule,[4] is a feature from the Mega Man X series. Dr. Light created several capsules and hid them in different locations, all of them containing a hologram of Dr. Light, which gives a message for X and a power-up, usually parts of an armor, although in some games he also gives a full armor, chips that enhance the power of the current armor, or a secret technique. In some games like Mega Man X7, Dr. Light's messages appear to be recorded reproductions, while in others like Mega Man X5 and Mega Man X6 it appears he is sentient and aware of his surroundings, interacting with the person that found the capsule and talking about recent events.

Has four capsules with parts for X's second armor. Also has a secret capsule.

Has eight capsules, four blue capsules with parts for X's third armor, and four red capsules with upgrades for the parts. Also has a secret capsule.

Has five capsules with parts for X's Fourth Armor. Also has a secret capsule.

The game has eight capsules with armor programs, four of them for the Falcon Armor and four for the Gaea Armor. Zero can also take the armor programs for X. Also has a secret capsule for each character.

The game has eight capsules with armor programs, four of them for the Blade Armor and four for the Shadow Armor. Zero can also take the armor programs for X.

The game has four capsules with parts for the Glide Armor. Only X can interact with the capsules.

Has eight capsules that can only be interacted by X. X will receive the Neutral Armor in the first capsule found by him. Each capsule has one part for the Neutral Armor, four having parts that form the Hermes Armor and four with parts for the Icarus Armor.

Hidden Light Capsules are recurring themes throughout several of the Mega Man X games. They are all capsules that are usually hidden well within one of the final stages of the game, and have a certain requirement for the capsule to appear. The first three hidden capsules bestow X with a powerful attack, and the subsequent two grant X with a powerful armor. These special upgrades cannot be saved by passwords, so, if the game is reset, the player must replay the level again. The upgrades from X5 and Maverick Hunter X are exempt to this, since such games omitted passwords in favor of the console's save features (the PlayStation and the PSP, respectively).

The Hadoken (波動拳, Hadoken "Surge Fist") is a secret move Capcom included in Mega Man X and Mega Man Maverick Hunter X. It is based on the Hadouken attack from the Street Fighter series, and is executed in the same way. In fact, in some versions of the game, X shouts the name of the attack, just like the Street Fighter series. While X's health gauge is full and he is on the ground, input the combination: ↓↘→+ATTACK. X should unleash a powerful energy ball. It is the most powerful attack from the game, causing 32 damage, being able to destroy most bosses and enemies in a single hit, with the exception of Mole Borer, Anglerge, Cruiziler, Utuboros, Thunder Slimer, RT-55J and Wolf Sigma. As the health of those enemies is above 32, they are killed with 2 hits, except for the Utuboros that takes 3 hits, and the Wolf Sigma who is immune to it. In Maverick Hunter X, both of them are killed in one hit.

To obtain the Hadouken, X must obtain every Sub Tank, Life Up and the four Armor Parts. Play through Armored Armadillo's stage until the last rolling platform. As the platform bursts out of the tunnel and through the sky, dash-jump off of the platform and ascend the wall right on top of the gate to Armored Armadillo. There should be a Life Energy pellet. Depending on what console the game is played on, instructions will differ from this point:

Regardless, Dr. Light will be wearing a Karate uniform (Gi) when he teaches X the Hadouken. In the Japanese versions and English iOS version of the game, Light says that he trained on the great waterfalls ("dai bakufu" in Japanese) visible on the background of the stage, and developed a technique that he will teach to X. He also makes a joke, in the Japanese version saying that by "bakufu", he doesn't mean the Edo bakufu. In the English iOS version his joke was replaced by him saying that he planned to call his technique "Hachoo-ken" in honor of the terrible cold he caught while training in the cold torrents.[5]

Shoryuken (昇龍拳, Shouryuuken, "Rising Dragon Fist") is the technique learned in Mega Man X2. It is based on a Street Fighter attack of the same name like the Hadoken. It is executed with →↓↘+ATTACK while X is at full health and on the ground. X will surround his arm with fire and perform a powerful uppercut, causing massive damage to its targets. While it is believed to kill all bosses in one hit, it does not. If the edge of the boss is grazed, it takes heavy damage, but does not kill it entirely.

In order for the Shoryuken capsule to appear, X must own every Sub Tank, Life Up and the four Armor Parts. The Shoryuken capsule can be found in Agile's station of the X-Hunters' fortress. After navigating the vertical passage with the jet platforms, let the Bat Bones follow him. Shoot one with the Crystal Hunter to reach the ladder. Ascend it to reach a spike-riddled challenge. It consists of a large sea of spikes, a safe area, and a [ shaped passage of spikes. To pass the first part, allow another Bat Bone to follow X. When X runs into it, use his invincibility to quickly cross the sea of spikes. The second part is more difficult: Either use an air-dash for one part of it and a charged-up Speed Burner for the other, or allow another bat to follow X and air-dash to cross the second part. Afterwards, have X slide down the left wall. X will drop into a corridor with the Shoryuken capsule inside, after getting an amusing message from Dr. Light: "Wow! You're so cool! I'm not worthy! I'm not worthy!"

In Mega Man X2 the Shoryuken can also be reached from the lower path by using the Crystal Hunter on the nearby Pararoid R-5.[6]

In Mega Man Xtreme and Mega Man Xtreme 2, X can find the Shotokan moves, which allows him to use both, the Hadouken and the Shoryuken (written as Hadou-ken and Shouryu-ken in the games). To execute it, X must be on the ground and fully charge his buster with the B button. When the B button is released while holding ↓, X will release the Hadouken. If released while holding ↑, he uses the Shoryuken. Most of the items from the games are required to make the capsule appear.

The Hyper Chip (ハイパーチップ, Hyper Chip) is a hidden upgrade for the Third Armor in Mega Man X3. It allows X to take advantage of all four enhancement chips at once. The armor gains a striking gold color after obtaining the Hyper Chip.

To obtain the Hyper Chip, X must have acquired every single item available in the game except for the enhancement chips. In the first station of Dr. Doppler's fortress, a room below the Ride Armor platform with rolling balls is the target. Drop down the first pit when spiked balls are in sight. Slide down the left wall, and X will fall into a hidden corridor with the Hyper Chip capsule inside. Again, X must have a full life gauge when approaching the capsule's location, so it's recommended to use the Ride Armor or Zero to avoid damage.

The two best armors in Mega Man X5, the Ultimate Armor and Black Zero, can be obtained without a code. In the third Zero Space stage, there is a vertical shaft that leads to a capsule, which appears regardless of item collection rates (it is possible to have collected ZERO items and obtained NO weapons, as shown in various SDA speedruns). To get the Ultimate Armor, the player must reach the capsule without any armor and be the standard "X". After obtaining it, the Ultimate Armor must be selected from the Stage Select Screen. When receiving the Black Zero enhancement as Zero, however, he is automatically upgraded, and cannot be restored to his standard armor. Strangely enough, like most of the secrets featured, this upgrade was given to Zero by Dr. Light as well, the latter even stating he made it for Zero.

It is also possible to unlock both in the same game. To perform this, the player must enter the capsule with either X or Zero. However, the second the player gets the character's armor, purposely lose all lives (or quit or soft reset, then pick "Continue" from the title screen and pick "Use Current Data"). Next, return with the other character, get the armor, and both will be available.

"It's me, Dr. Thomas Light. I'm a scientist from Earth who tirelessly worked on the continual evolution of robotics for the benefit of mankind. Although I may no longer physically exist in the present, my will to assist mankind lives on."
—Dr. Light's data in the Stark-Light Library

While a Light Capsule is not present, Dr. Light's hologram appeared inside the Avengers Tower, where he appears to have a function similar to Marvel's J.A.R.V.I.S., giving information and suggestions to the heroes. The information in the Stark-Light Library (the game's database) is presented by him.

The capsule X is sealed in in Dr. Light's Laboratory is identical to a Light Capsule in the Mega Man comic book series by Archie Comics.

In the Rockman X manga, X encounters a Light Capsule when going after Chill Penguin.

In the Rockman X2 manga, only Dr. Light's hologram appear, the capsules being absent.

In the Rockman X4 manga, X goes after Dr. Light and obtains the Ultimate Armor from a capsule.

In the Carddass, Zero finds a capsule and obtains the Energy Armor.

Return X found a capsule and infected it with the Limited, using it to increase his power and create an army to fight against X. In the debris of two Reploids created in the capsule, Himmel and Berg, X found parts of the Grow Up Armor, equipping it to fight againt Grow X. At one point, the capsule goes out of control and changes into a Mother Limited, and Grow X merged with it to become Doppler X. It is unknown what happened with the capsule after the battle. 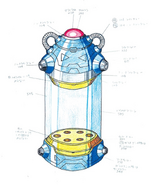 Light Capsule in Rockman X Mega Mission 2.
Add a photo to this gallery

Retrieved from "https://megaman.fandom.com/wiki/Light_Capsule?oldid=332249"
Community content is available under CC-BY-SA unless otherwise noted.