Lilly, known in Japan as Ran Igarashi (五十嵐ラン, Igarashi Ran), is a character from Mega Man Battle Network 4. She is the NetOp of WindMan.EXE and the priestess of WindMan's temple on Scissor Island.

Lilly is a calm and sensible person, but is prone to getting nervous. When she becomes anxious, she drinks and gets drunk accidentally. As a result, she transforms into the opposite of her usual self: agitated and irrational.

In the Eagle Tournament, she is Lan's opponent and visits him before their match starts. After their meeting, she gets anxious and drinks from the gourd around her neck. Unfortunately, it was filled with rice wine instead of water and she became intoxicated. Lilly then tries to cheat to win the match. First, she uses a virus on one of the robots and pretends to be attacked by it so Lan will come to save her and be deleted by the virus, Lan deleted the virus himself however. Later, she pushes Lan when he was leaving the park, making him drop his PET into the fountain, though MegaMan was unharmed.

Lastly, Lilly releases WindMan on the Net, with his full powers on the loose. When she becomes sober again, Lilly asks Lan to help stop WindMan. MegaMan finds manages to calm him down and they make their scheduled match at the arena. However, Lilly takes another drink of wine before the match and becomes intoxicated again. She Netbattles Lan and loses. Afterwards, she sobers up again and after a farewell, Lilly goes back to Scissor Island.

Lan uses a particular chip during battle that causes a tornado to appear and soon disappear, with MegaMan, Roll, and IceMan caught amongst it. They are transported to Shiisaa Island, where they first meet Windman.EXE. Windman thinks they are enemies, but his operator, Lilly, advises him that they are friends. Ms. Yuri is also on Shiisaa island and has NeedleMan infect the island with a virus; though MegaMan and the others manage to fight them off.

Needleman later causes a storm over Shiisaa Island, and fuses with a program making the storm more violent and himself more powerful. MegaMan fights NeedleMan and is almost deleted, but WindMan blocks the attack. WindMan uses Wind Bomb to damage NeedleMan, but he proves too powerful and WindMan is impaled by NeedleMan in an effort to stop the storm. WindMan and MegaMan then use Soul Unison, giving MegaMan the Wind Soul. MegaMan defeats NeedleMan, while WindMan stalls the program, stopping the storm from getting any worse. Meanwhile, Lilly returns the idol to its proper place, saving the island.

Lilly greets Lan and the others.

Lilly guides Lan and the others around the island. 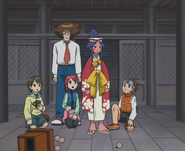 Lilly wakes up, previously knocked unconscious by an open bottle of Liquor. 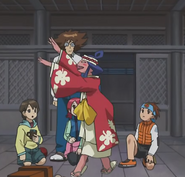 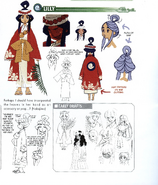 Concept art of Lilly.
Add a photo to this gallery
Retrieved from "https://megaman.fandom.com/wiki/Lilly?oldid=284643"
Community content is available under CC-BY-SA unless otherwise noted.