The Link PET retains the holographic touch screen of its predecessor, and also features a stylus for further interactivity, possibly a reference for the Nintendo DS stylus.

Not much is said about this PET model in the games, except that Lan Hikari has one in Mega Man Battle Network 6 and it contains all the basic features from previous models.

In Rockman.EXE Beast, the Link PET_EX was developed by Ministry of Science and IPC and tested in the first episode. During Cross Fusion, it gives Netto, Enzan, and Raika Jet Vernier, and the Battle Chip processing speed is faster than its predecessor. Netto wears his PET in a holder on his left arm.

In Rockman.EXE Beast+, Netto's PET is upgraded by Meijin to be better compatible with the Beast Out ability.

Rockman appearing as a hologram on Netto's shoulder.

Toy versions of the Link PET_EX between 2005 and 2006 by Takara. This PET supports the Navi Link System, which lets Navi Data Chip progress be stored within the chip itself and allow those Navis' current stats to appear in the Japanese version of Rockman.EXE, and Rockman.EXE Battle Chip Stadium. This is the only Rockman.EXE PET toyline that doesn't have an international version. 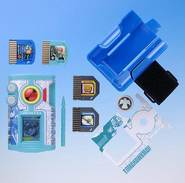 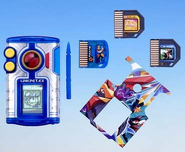