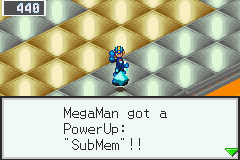 This page is for all the upgrades in Mega Man Battle Network 3 and their locations.

Attaining an HP Memory increases your Maximum HP by 20 each. HP Memories are often found in net merchants. Net merchants often sell 3 HP Memories. The first merchant in ACDC Area 2 sells the very first buyable HP Memory for 1000 Zenny. Some are found as Mystery Data as well as in special hiding spots in the real world. They can also be found as a reward for requests in the Job BSS.

Regular Ups (shortened as "RegUP") increase the memory space as to which the player can select a specific Battle Chip from the Folder to use at the beginning of every battle. RegUPs can be found in many places throughout the net in Mystery Data. They can also be found in hiding places as well as be given as a reward from requests in the Job BBS.

Expansion Memory expands the size of the Navi Customizer (NaviCust). There are only two:

Sub Memory upgrades increases the number of Sub Chips the player can hold at one time.

Retrieved from "https://megaman.fandom.com/wiki/List_of_Mega_Man_Battle_Network_3_upgrades?oldid=285543"
Community content is available under CC-BY-SA unless otherwise noted.