List of Pantheons in the Mega Man Zero series.

In the "Find Hidden Base" mission from the first Mega Man Zero game, where Zero fights against Blizzack Staggroff, they are green and their eyes are used as spotlights to detect intruders. If they see Zero, Pantheon Warriors will appear to assist them.

Pantheon Hunter (パンテオン・ハンター, Pantheon Hunter) is a standard Pantheon equipped with an arm cannon on the right arm. It is the simplest, in design and function, of the Pantheons and has its first appearance in Mega Man Zero's introductory sequence. This one fires three shots in a row.

The three Pantheon Hunters that appear in the first mission do not attack, they only walk back and forth.

Pantheon Flyer (パンテオン・フライヤー, Pantheon Flyer , misspelled as パンテオン・フライナー is some sources[1]), is a flying Pantheon equipped with an arm cannon like the Pantheon Hunter. It can fly to the background to evade Zero's attacks.

Pantheon Warrior (パンテオン・ウォーリア, Pantheon Warrior) is a Pantheon from Mega Man Zero armed with a large fist. It uses the thick armor on its fist to block shots, and charges after Zero on sight.

Pantheon Core (パンテオン・コア, Pantheon Core) is the boss of the "Destroy Train" mission in Mega Man Zero. It is a highly precise artificial brain that act as the core of a train and manages all of the train routes for goods and military units into Neo Arcadia. It attacks with a flamethrower and tries to smash Zero into hidden spikes on the ceiling by lifting parts of the floor.

Pantheon Ace (パンテオン・エース, Pantheon Ace) is a pair of flying Pantheon mid-bosses. They are the first of three bosses Zero must face in the Neo Arcadia Shrine stage, first appearing as statues. They are slightly faster and more lethal versions of the Pantheon Flyers, and look like the Variant forces in Mega Man Zero 4. The only real danger during the fight is the spiked pit in the center of the room. They are the only kind of Pantheon seen with visors instead of one singular eye. 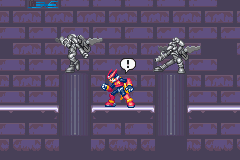 Pantheon Hammer (パンテオン・ハンマー, Pantheon Hammer) is a purple armored Pantheon equipped with a flail hammer and a handheld shield. The shield can be removed with the Chain Rod. Most only throw their flails at Zero, but some, if given enough space, will actually charge to attack him. Their attack behavior resembles the Hoganmer's from Mega Man X.

Pantheon Hopper (パンテオン・ホッパー, Pantheon Hopper) is a green Pantheon armed with a claw on its left arm. They crawl towards Zero and leap to attack when close.

Pantheon Aqua (パンテオン・アクア, Pantheon Aqua) is an aquatic Pantheon from Mega Man Zero 3. It can shoot harpoons in eight directions, similar to the Metal Blade in Mega Man 2, and appears in Childre Inarabitta and Blizzack Staggroff's stages.

*Zero will continually take this much damage for as long as Modified Pantheon Aqua holds him for.

Modified Pantheon Aqua (改造パンテオン・アクア, Kaizou Panteon Akua) is the mid-boss of Childre Inarabitta's stage, Oceanic Highway Ruins. It is a Pantheon Aqua modified by the Dark Elf when it tries to attack it.

The power it received causes it to morph into a form similar to Elpizo's second form in Mega Man Zero 2 (and shares similarities to Copy X's Seraph form from the first game, fitting due to being a mass-produced copy of X), and may have been driven insane, as it destroyed one of its own kind without reason (though the other Pantheon Aqua being destroyed may have been an accident). It also gained the ability to speak, since it lets out gremlin-like cackles and mutters phrases spoken by Copy X's Seraph form in an extremely high pitch. The Modified Aqua uses its sharp claws to shake the walls of the room, causing chunks of the ceiling to rain down from above; fires a pink, sweeping laser from its eye; shoots five, flaming harpoons in contrast to one normal harpoon; and tries to grab Zero and drain the life force from him. After its defeat, Zero receives the Cyber-elf Kynite.

Pantheon Base (パンテオン・ベース, Pantheon Base) is a green rotund Pantheon from the Snowy Plains, Glacier le Cactank's stage. It attacks with a flail hammer on its left arm and rides a sled-like hovercraft. Zero can also use its hovercraft after destroying it. Respectively, they look and attack like Cactank, and only appear in the Snowy Plains, implying they might be his own personal Pantheon guards.

Pantheon Bomber (パンテオン・ボマー, Pantheon Bomber) is a Pantheon that throws bombs from the broken windows of Deathtanz Mantisk's stage, the Old Residential Area. They will go back to hiding behind the windows if their target is not around.

Pantheon Fist (パンテオン・フィスト, Pantheon Fist) is an orange Pantheon with large fists from Mega Man Zero 3. Their punch can push Zero off an edge. It is possibly an upgrade of the Pantheon Warrior. Their fists have thrusters to make their punch stronger and faster (since there might be a clue that the fists are heavy due to its' speed on moving towards Zero).

Pantheon Corpse (パンテオン・コープス, Pantheon Corpse) is a broken Pantheon found in Fenri Lunaedge's stage, the Hibernation Chamber. Scrap Elves can revive them. It acts similar to the Pantheon Zombie and the Pantheon Guardian, walking slowly and attacking with an electric arm.

In the book, Mega Man Zero Official Complete Works, there are sketches of three Pantheons that were not used in games: